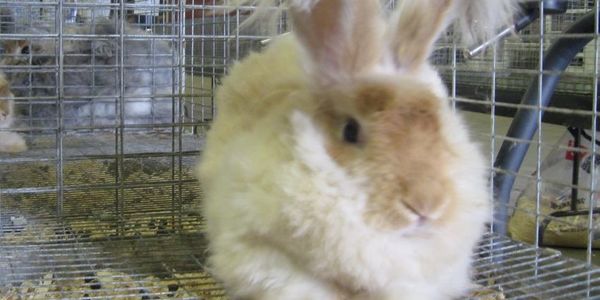 Screaming in Pain as Their Fur Is Ripped From Their Bodies, Angora Rabbits Endure Horrific Cruelties

Angora fur is considered some of the softest wool around - but the way it's produced is anything but soft and cuddly.

Luckily, more and more fashion brands are admitting the cruelty behind this "cozy" fabric and banning its use. Sign the petition to demand Louis Vuitton, Prada, and Chanel join the movement!

While in our minds, we might think of angora being harvested on happy farms where bunnies are politely groomed and buzzed down every so often to relieve them of excess fur, and as a happy consequence, provide wool for our coats, the truth is much more grim.

Angora fur comes from a type of rabbit, mostly kept locked up in dingy, feces-coated cages their entire lives to satisfy our fashion demands. Because longer fur fibers are considered the most desirable, for the most part, the rabbits aren't gently shaved and sent off to continue leading their happy (albeit less fluffy) lives. Instead, workers are told to get the entire hairs out of the animals, right down to the follicles' bulbs - leading to horrific scenes.

Videos document rabbits screaming in pain while garment workers rip their fur lengths of fur from their skin and even being strapped onto boards where staff stretch them out and hack off their fur. Then these poor creatures are sent right back into their filthy, tiny cages where they sit, trembling, trying to recover from the terror they just endured... until eventually, they are subjected to it all over again.

Fortunately, public pressure from animal lovers like you has been forcing fashion houses to cease their use of angora wool. In 2021, both Valentino and Armani banned angora in their products, and before them, dozens of other brands had already made similar pledges.

Care2
Screaming in Pain as Their Fur Is Ripped From Their Bodies, Angora Rabbits Endure Horrific Cruelties
DELENTWEET