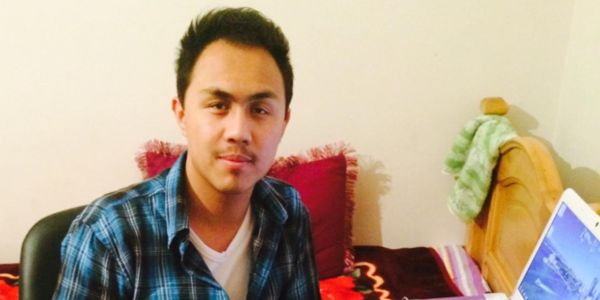 Urge the Chinese Government to release Yiliyasijiang and close the "re-education" camps.

In China, Uyghur people are being rounded up and forced into internment camps. Over two years ago, Yiliyasijiang Reheman went missing while studying in Egypt – his family believe he was taken. Demand his release now.

Two years ago, Yiliyasijiang Reheman and his wife Mairinisha Abuduaini were expecting their second baby. They were studying in Egypt – far away from their home in the Xinjiang Uyghur Autonomous Region of China, where Uyghur people and other mainly Muslim ethnic people face daily discrimination.

But their lives were shattered in July 2017 when the Egyptian authorities started rounding up hundreds of Uyghur people in Egypt and handing them over to the Chinese government. The family tried to flee from Egypt – but Yiliyasijiang didn't make it onto the plane.

He hasn't been seen since.

Around 200 students were rounded up that day – 16 of them were deported to China. Since 2017 up to 1 million mainly Muslim people have been torn from their families and locked up in these camps in China.

Just after he was taken away, Yiliyasijiang's daughter was born. Mairinisha has been searching for her husband, never losing hope that their family will one day be reunited.

"Our children need their father. I will never give up until we can be reunited with my husband." – Mairinisha

Call on the Chinese government to:

In 2017, Yiliyasijiang Reheman was studying at a university in Egypt and looking after his growing family. Then, in July of that year, people from your government pressured the Egyptian government to round up hundreds of Uyghur people in Egypt. Yiliyasijiang was among them.

It is likely that Yiliyasijiang is now in one of your country's secret internment camps, where numerous human rights violations are taking place.

It is shocking and not right that up to one million mainly Muslim people have been taken away from their families and locked up in these camps since 2017. Please release Yiliyasijiang Reheman immediately and unconditionally and return him to his family – he has done nothing wrong.