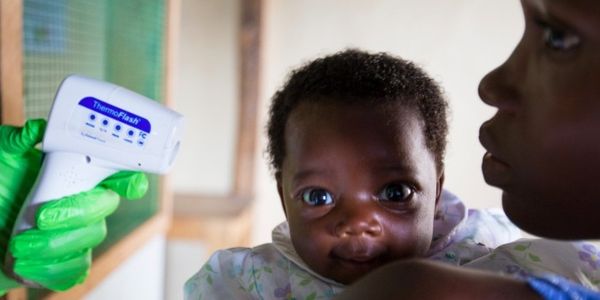 Pledge to join the fight to stop Ebola!

In late July 2018, an outbreak of Ebola in a northwest province of the Democratic Republic of the Congo (DRC) was discovered. The outbreak is now the second-largest ever, exceeded in size only by the 2014 outbreak in West Africa, and is far from contained.

Nearly 2,000 have died, and the World Health Organization has declared it a global health emergency. International Medical Corps has been working with the DRC Ministry of Health since the beginning, running an Ebola treatment center, providing patient screenings, and training thousands of Congolese nurses, doctors and hygienists in infection control and prevention measures, as well as providing much-needed supplies and supporting surveillance efforts across Ebola-affected areas in DRC.

International Medical Corps provides lifesaving medical care and mental health support to millions of people in Africa, the Middle East and around the world who are suffering due to disease, disasters or war and conflict. And they are training local health workers as part of every response, so those communities can be their own best First Responders when the next disaster hits.

Highly infectious diseases like Ebola spread fast, and without swift and effective treatments thousands more could die. You can be part of the solution.

Sign the pledge to say you stand with International Medical Corps, because you believe that healthcare is a human right, and that access to treatments for deadly diseases should not depend on where you were born. Your support is critical to equity in global health!

Care2
Pledge to join the fight to stop Ebola!
DELENTWEET