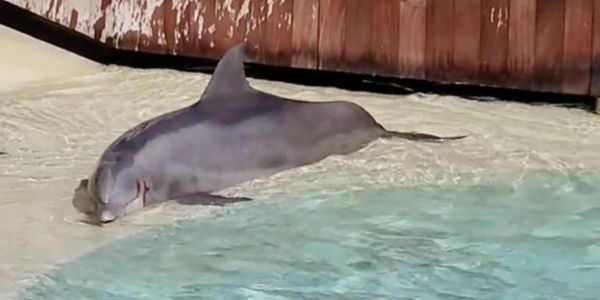 SeaWorld Mistreated Dolphins Until They Attacked Each Other During a Show. It Must Send the Animals to a Sanctuary!

SeaWorld already has a reputation for abusing and mistreating its animals, sometimes to the point of catastrophe. And now, it seems, the park's cruel behavior has become infectious, causing so much distress that even the animals are now acting abusively toward each other.

A visitor at SeaWorld Orlando witnessed one heartbreaking example first-hand. As he watched trainers force a pod of dolphins to perform in a live show, suddenly something unexpected happened. A whole group of other dolphins in the tank rushed at one individual dolphin, attacking it until it began to openly bleed.

This would not have happened if the captive creatures weren't in terrible psychological agony.

Sign the petition to demand SeaWorld end its dolphin shows and send these poor captive animals to a reputable sanctuary!

Dolphins are enormously intelligent, complex creatures that thrive in open waters where they can play, form friendships, and work in teams together. Scientists are even discovering that dolphins have developed a form of language amongst themselves, and even have names!

But at places like SeaWorld, these wild beings are trapped and can't get away. On top of that, they're forced to abide by humans' schedules, turned into live puppets and made to entertain humans while, essentially, imprisoned.

The pressures of this unnatural, coercive lifestyle eventually cause severe emotional pain - and even physical illnesses, injuries, and death.

That's what this SeaWorld visitor witnessed recently in Orlando. He recorded evidence of the dolphin attack, showing the bleeding dolphin resting by itself on one side of its enclosure, and then posted it on TikTok. The video has since gone viral.

We must pressure SeaWorld to finally do the right thing and send these dolphins to a sanctuary. We have to raise all our voices together, in unison, in order to ensure executives listen. Sign the petition now!
petitie tekenen
DELENdelen met mijn Facebook vriendenTWEETE-MAILEMBED
petitie tekenen
Meer petities bekijken:
Je hebt JavaScript uitgeschakeld. Hierdoor werkt onze website misschien niet goed.

Care2
SeaWorld Mistreated Dolphins Until They Attacked Each Other During a Show. It Must Send the Animals to a Sanctuary!
DELENTWEET