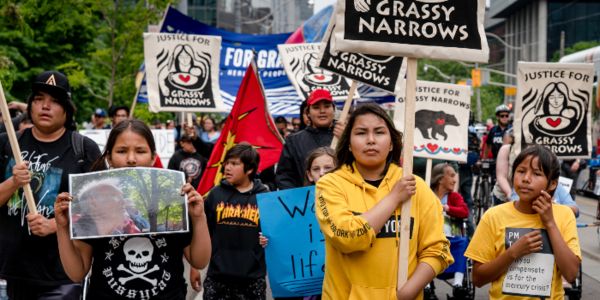 Call on Canada to address the mercury crisis in Grassy Narrows

"We are fighting and always will fight for our clean safe land, which we call home and will forever be our home. We just want what's right." – Annie Sneaky, 14 years old

For more than five decades, the people of the northwestern Ontario Indigenous Anishnaabe community of Grassy Narrows First Nation have been forced to live with the devastating consequences of government indifference to their lives and safety. In the 1960s, the provincial government allowed massive amounts of mercury waste to be dumped into their river system.

Today, fish in the waters around the community still contain dangerously high levels of toxic methyl mercury. And because of government failure to deal with this threat, the people of Grassy Narrows -- whose traditions and economy revolve around fishing -- now face the worst community health crisis in Canada.

Methyl mercury is an extremely dangerous environmental contaminant. Exposure can cause debilitating loss of motor control among many other severe, chronic health problems. For children, exposure to mercury can impair mental and physical development. The young people of Grassy Narrows have the right to grow up in a healthy environment and a thriving community.

Urge the federal government to help restore what mercury has taken. ​

Canada has failed the people of Grassy Narrows. The federal and provincial governments have long been aware of that mercury contamination of the English-Wabigoon River system poses a profound threat to the First Nations who depend on these waters. Instead of taking urgent action to meet the communities needs, the response of government has been to deny the problem, which has only made things worse.

This has to change.

Before another life is lost to mercury poisoning, I call on the federal government to take the following urgent measures:

- At long last, publicly acknowledge the scientific evidence that the people of Grassy Narrows are suffering from widespread, chronic mercury poisoning.

- Ensure that all First Nations in northwestern Ontario have access to specialized medical care necessary to treat mercury poisoning, including by fully funding the treatment centre sought by Grassy Narrows.

- Commit to full and fair compensation for all community members for the harm and suffering that they have experienced, including the impact on the ability to practice their fishing traditions.

- Work with the provincial government of Ontario to fulfill your promises to clean up the river system.