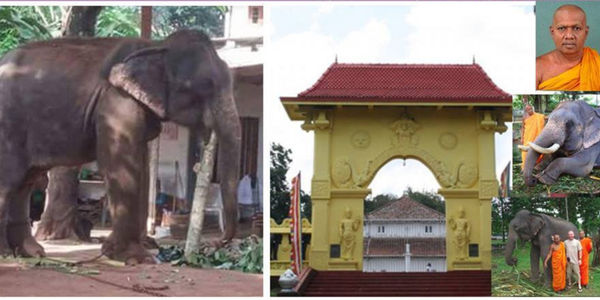 The Rajamaha Viharaya Temple in Kotte Sri Lanka, has a history of abuse and neglect of their elephants, resulting in the death of five elephants.

A week ago, an elephant named Surathala died at the temple due to abuse and neglect. He had been illegally rented out for hard labor, and seven years ago suffered a terrible head injury while working. Because of his head injury his behavior became erratic, so the temple chained him to one spot where he stayed until last week when he passed away. He also had huge open wounds on his legs from the chains, that were never treated. Several years ago, video was taken of him being beaten by his mahout, or handler. The video is on Youtube. "Surathala the abused temple elephant".

Another elephant named Hemantha, fell and injured his leg at a perahera, which is a religious festival. His leg was never treated properly, and three years later in March of 2016, he passed away from an infection. He was only twenty two. Elephants can live up to eighty years old. He was also rented out for hard labor. He is pictured above, and as you can see his leg was incredibly swollen. He was given the branch which he has in his mouth so he could bite down on it for the pain.

The govenrment of Sri Lanka gifts elephants to temples, and those elephants are supposed to be taken care of, yet they are kept in heavy chanis in one spot with little room to move or turn around, and controlled with a bull hook. It is also illegal for a temple to rent out elephants for hard labor, yet all five elephants were rented out for hard labor. Inspite of the Sri Lankan government having knowledge of all of this, they have looked the other way. We are asking that the government finally acknowledge this terrible situation, remove the remaining elephants from the temple, and ban the temple from owning any elephants in the future.