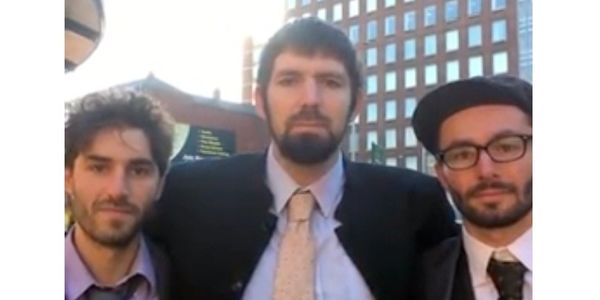 These Men Could Spend a Year Behind Bars for Protesting Peacefully

Simon Roscoe Blevins, Richard Loizou, Richard Roberts and Julian Brock might just be four ordinary men, but over the summer they did an extraordinary thing. Incensed that the government had approved an application that would allow fracking in their community, they decided to do something about it.

In July, when several big rigs carrying drilling equipment went to the fracking site, they each climbed up and "claimed" a lorry, causing the convoy of lorries to halt in their tracks. For 45 to 85 hours, each man stood their ground, encouraged by other protesters who supplied them with food, water, and blankets.

But when the "Frack Free Four," as they came to be known, came down, they were promptly arrested and charged with causing a public nuisance, a crime that could send the four of them to jail.

Then, earlier this week, the court came down with its sentence. Bevins, Roberts, and Loizou will serve more than a year behind bars, while Brock was given probation for pleading guilty. The ruling shocked the entire community for its severity. Their punishment is the first custodial sentence handed down to environmental activists in the UK in nearly 86 years. And it is even more surprising because of their protest completely peaceful.

Now three members of the group face more than a year in prison away from their families, friends, and jobs. These men stood up for what was right and attempted to save their community from the dangers of fracking. They should be honored, not punished.