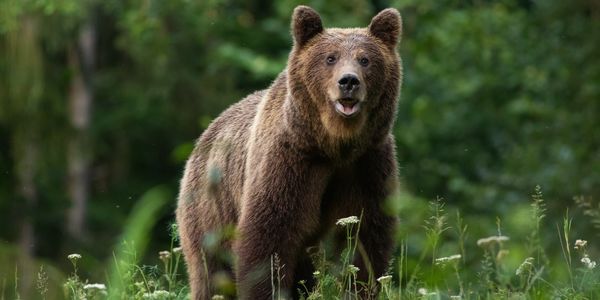 A Bear Got Comfortable with People. Luckily Park Managers Chose to Save Her.

State and national parks represent a tantalizing opportunity for critters like bears: the possibility to enjoy lots of convenient treats, all just a backpack away. When visitors start arriving at parks in large numbers during the summer months, bears often find their way to the same destinations, in search of easy leftover food.

Sadly, these human enticements often mean bears and other wildlife wind up dead. Recently, officials in Canada gunned down a polar bear when it strayed too far from home, and authorities in Florida hired a hitman to shoot a curious alligator to death - in its own state park.

But wildlife managers at the Great Smoky Mountains National Park in Tennessee are choosing a different approach. Even though staff there often identify around 50-70 bears in human areas of the park each year, they're committed to using non-lethal ways to resolve the problem.

Sign the petition to demand all other state and national parks in the U.S. implement a no-kill protocol for wildlife that get too curious or comfortable around humans!

Recently, a female bear in the Great Smoky Mountains National Park noticed a golden opportunity: food laid out in plain sight, easy to claim for her own. It was all right in front of her on picnic tables, in trash cans, and in loose backpacks near several not-well-secured camping sites. Naturally, she knew a feast when she saw one! So she simply ambled around, picking up the various food items and eating them.

Seems like a smart bear, right? Well, not quite - and certainly not in any other park. Anywhere else, this would have put her life in danger - just for being resourceful and clever. Park officials in the Great Smoky Mountains knew her fate could be a sad one if they didn't intervene fast. Bears who get too comfortable eventually decide to check out cars and homes, and might even be unwilling to run away when a human confronts them. And that would spell disaster.

So wildlife managers found the bear, gave her a GPS collar, and relocated her to another park where she'd be further away from humans. Once she was there, they began studying how she adapted. In fact, she's part of a larger study on relocated bears, so park managers can monitor how to best support these animals.

This is a great idea, and we need more creative solutions like this. Why should wildlife have to die for us? We're in their space, after all. Parks are their homes. We're just visiting on vacation - and then leaving them dead.

Care2
A Bear Got Comfortable with People. Luckily Park Managers Chose to Save Her.
COMPARTILHARTWEET