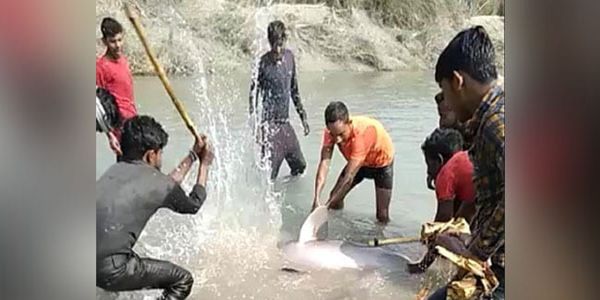 Three Men Beat An Endangered Dolphin To Death And There Are Too Many Legal Loopholes To Stop This Abuse!

Dolphins are highly intelligent, emotional creatures. But tragically, many species of dolphins are threatened and endangered -- often due to human influence. One of those threatened dolphin species is the Gangetic dolphin, but despite its vulnerable and therefore protected status, one member of this species was horrifically murdered in India recently.

A video was taken showing one of these freshwater dolphins being beaten, hammered, and sliced by a group of men with axes in the state of Uttar Pradesh, India. The poor creature was murdered for no apparent reason, and its attackers have yet to face any consequences.

Sign now and demand that the Indian Government charge these men with animal abuse to prevent this kind of act from ever happening again!

Incidents like this one happen all of the time in India, from the torture of dolphins, dogs being beaten, to leopards being trapped and killed. The frequent cases of animal abuse in India point towards a weakness in the laws which often carry a punishment that doesn't fit the crime.

These three men have now been arrested and are yet to receive any punishment for this brutal act of animal abuse! Despite increasing incidents of violence, torture and animal abuse over the years, the Prevention of Cruelty to Animals Act of 1960 has not yet been revised.

Please act now and urge the Indian Government to revise the Prevention of Cruelty to Animals Act and enforce stricter punishments!

Care2
Three Men Beat An Endangered Dolphin To Death And There Are Too Many Legal Loopholes To Stop This Abuse!
COMPARTILHARTWEET