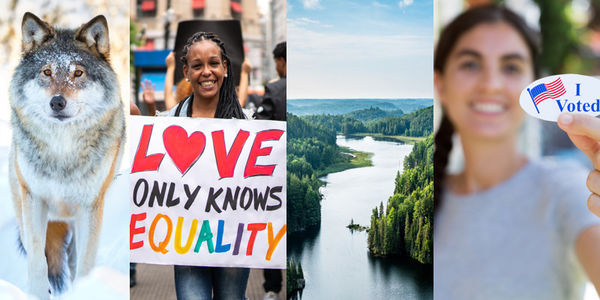 Republican Candidates Want to Rip Away Rights and Environmental Protections. Vote for Democrats to Build a Brighter Future!

Willful ignorance to the climate change that is wrecking our homes and environment. Blatant disdain for the rights of women, racial minorities, immigrants, and LGBTQ folks. Disregard for the safety of our children in their schools. Indifference to the plight of wildlife, dying off in record numbers due to human construction, pollution, and climate chaos as we hurtle towards the planet's sixth mass extinction event. Record-breaking subsidies for billion-dollar corporations that are working people to the bone and dumping wasteful products into our lands and seas.

These are the options that Republican candidates in the United States are offering as we draw closer to the country's midterm elections on Tuesday, November 8, 2022. We can't let them win - especially when there is hope for a better day if we elect candidates who truly have a heart and care.

Sign to show your decision to vote in the 2022 midterm elections for a more loving, compassionate, kind future with Democratic lawmakers!

It's not all bad, though. We have reason to be optimistic. Working together this past year, Democratic legislators in the U.S. Senate and House of Representatives collaborated with President Joe Biden to pass the Inflation Reduction Act of 2022. This historic law represented the biggest step Congress has ever taken to fight climate change! With shocking help from Senator Joe Manchin of West Virginia, the law ushered in $370 billion in funding for clean energy projects that will help create more jobs, save our planet, and restore our children's future!

On top of that, Democratic leaders at the state level have been fighting to protect reproductive healthcare, including abortion, as well as broader access to affordable healthcare for all. As a result, nearly half of all U.S. states are protecting the right to access an abortion - including in surprising midwest and southern states like Montana, Kansas, and Florida.

President Biden and Democratic members of Congress even managed to work together with Republican lawmakers to actually pass the first major gun safety law in almost 30 years. Called the Bipartisan Safer Communities Act, it doesn't solve all of our mass gun violence problems in the U.S., but it's an important start. It's something that seemed improbable for years - but it turns out that, with enough heart, we can actually make the right decisions to keep our children safe.

And this is just the start. If we keep electing more Democrats to local, state, and federal office, we can make our homes, nation, and world a better place. Anything is possible - but we do need to work together. And we can only do that if everyone votes!

Sign here to show your commitment to voting for more Democratic leaders during the 2022 midterm elections, on or before November 8!

Sadly, the decision has become all the more clear with many prominent Republicans choosing to skip or no-show at their own electoral debates with opponents. From Governor Greg Abbott in Texas and Herschel Walker in Georgia, to Eric Schmitt in Missouri and John Kennedy in Louisiana, there have been numerous Republican candidates this year who simply refused to even try debating their Democratic rivals. Does that scream "democracy" to you? No! Instead, it just shows how much these candidates want to live inside their own echo chambers, where they never have to face real accountability from a diverse pool of constituents.

We must keep the U.S. heading in the right direction, by protecting the right to choose whether to give birth or not, wildlife's health and homelands, ecosystems and our overall climate, children's safety, and the rights of LBGTQ, BIPOC, and immigrant communities! Sign the petition to declare your intention to vote for Democratic candidates this fall.
assinar petição
COMPARTILHARcompartilhar com meus amigos do FacebookTWEETE-MAILINCORPORAR
assinar petição
Ver mais petições:
O seu JavaScript está desativado. Sem ele, nosso site pode não funcionar corretamente.

Care2
Republican Candidates Want to Rip Away Rights and Environmental Protections. Vote for Democrats to Build a Brighter Future!
COMPARTILHARTWEET