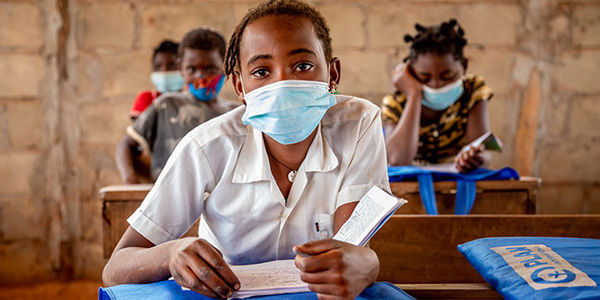 Globally, 130 million girls ages 6 to 17 are out of school. Child marriage, pregnancy, family pressures, gender-based violence, harassment and poverty, among other things, prevent girls from reaching their full potential. In fact, almost every three seconds, a child is forced into a marriage they don't want — one that will permanently alter the rest of their life.

At Plan International USA, we're dedicated to eliminating these barriers so girls can learn, lead decide and thrive. By partnering with communities, governments and the girls themselves, we're working to ensure every girl's right to equality, including in the classroom. Adolescent girls who remain in school are more likely to live longer and earn a higher income to support their families.

Sign Plan's petition now to show your support for the Keeping Girls in School Act!

The Keeping Girls in School Act (KGISA) is bipartisan legislation that brings attention to the systemic barriers preventing girls from accessing secondary education. It focuses on child marriage, religious and ethnic discrimination, female genital mutilation and safety traveling to and from school. Specifically, the KGISA:

— Outlines and highlights 14 of the barriers that girls face in accessing and remaining in secondary school.

— Requires the U.S. Global Strategy to Empower Adolescent Girls be implemented and updated every five years. This strategy brings the resources of the State Department, USAID, the President's Emergency Plan for AIDS Relief (PEPFAR), the Millenium Challenge Corporation (MCC) and the Peace Corps together to remove the barriers that keep adolescent girls from finishing secondary school.

On January 28, the U.S. House of Representatives passed the KGISA. It is now up to the Senate to pass the legislation. We need both Democrat and Republican senators to co-sponsor the bill.