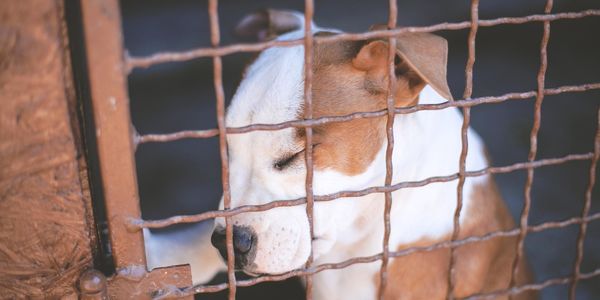 32 Dogs Were Found Enduring Horrible Conditions in This Florida Home. What's Worse Is What the Owner Seemed to Planning to Do With Them.

To many people, a constantly barking dog can be aggravating, and even a source of conflict between neighbors. But, when one community in Pinellas County, Florida heard nearly 40 dogs barking for hours and hours, day and night, it wasn't just annoying – it set off alarm bells.

The concerned neighbors alerted authorities, likely saving the lives of 32 pit bulls who were being hoarded – and probably even being prepped to participate in a gruesome fighting ring.

Sign the petition and demand that the state attorney for Pinellas County include a lifetime ban on owning dogs and firearms in the sentencing of this horrific case!

While the dogs have since been rescued, most of the poor pups were forced to stay outside in the Florida heat – trapped in shoddily made wooden crates. Some of the puppies were just weeks old, unlucky enough to be born into such cruelty. There were older puppies and adults too, old enough to soon be used for their owner's alleged horrible scheme – exploitative, bloody dogfighting. Authorities found clear evidence on the property that this was the plan for these defenseless animals.

Dogfighting, which is illegal in all 50 states, is widely understood as one of the most callous forms of animal cruelty. In order to make a profit, abusers intentionally break dogs' spirits and bodies, forcing them to develop fear-based aggressive reactions. Dogs are starved, beaten, and tortured in order to encourage the behaviors that are prized by people who stand to gain from fighting rings. Tragically, if a dog refuses to fight, they aren't spared – they're just used as bait or practice dogs, ripped apart by their peers over and over again. There are no winners in dogfighting except the greed-driven, heartless people who orchestrate it all.

Not only were 32 pit bull terriers found in this case, there were also two small children that were not being properly cared for, along with guns and ammunition. Signs around the property read, "Warning: Never mind the dog, beware the owner" and "Warning: There is nothing here worth dying for" – both depicting guns aimed at the reader. We know from extensive research that animal cruelty and abuse towards humans are closely linked – and evidence points this holding true here. The person responsible has been arrested and charged, but we also know that jail time and fines aren't restorative, nor do they stop someone from repeating harmful patterns.

Care2
32 Dogs Were Found Enduring Horrible Conditions in This Florida Home. What's Worse Is What the Owner Seemed to Planning to Do With Them.
COMPARTILHARTWEET