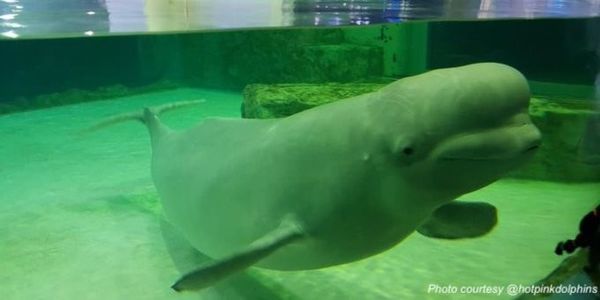 This captive whale was supposed to be freed - instead, she's still languishing in a corporate-owned aquarium

Two years ago, a conglomerate promised to free their captive beluga whale named Bella from an aquarium in South Korea. Local animal lovers fought hard for this victory -- but then the conglomerate did nothing after making their announcement.

Bella has been locked behind glass walls for at least seven years, since she was captured along with two other beluga whales and forced to become the aquatic entertainment at Seoul's Lotte World Aquarium. When two of the whales died, South Korean activists demanded Bella be spared the same fate.

Even though Lotte is a huge conglomerate in South Korea -- one of the five biggest in the country -- their efforts worked! Or, at least they seemed to. After amassing intense public pressure, activists finally convinced Lotte's stakeholders to vote to release Bella and save her life.

But things have actually only gotten worse for Bella. She's still in an enclosure, the aquarium attraction remains open, and experts say Bella is showing signs of significant psychological distress.

Belugas, like other whales, evolved to live in the huge expanses of the ocean, swimming hundreds of miles and interacting with all sorts of creatures in the wild. Locking them in sterile glass prisons the size of a human home with only a couple other belugas for company -- if any at all -- is cruelty, plain and simple.

Care2
This captive whale was supposed to be freed - instead, she's still languishing in a corporate-owned aquarium
COMPARTILHARTWEET