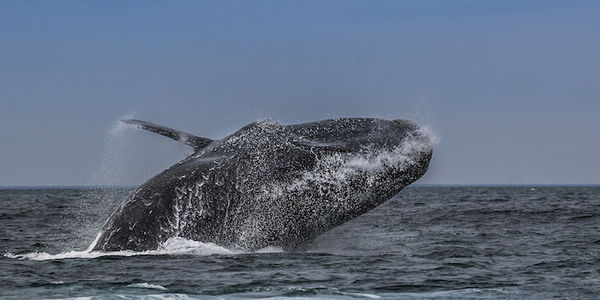 North Atlantic right whales are on the brink of extinction and need your help. Current population studies estimate that there are fewer than 366 living whales, with only 82 reproductively active females. Entanglement in commercial fishing gear is the leading cause of serious injury and death.

The law requires NOAA Fisheries to make new rules to protect endangered North Atlantic right whales in U.S. waters. After years of delay, NOAA Fisheries finally released a proposed rule to reduce entanglement risk, but their risk reduction measures are based on outdated science and do not go far enough to save right whales from extinction. Also, on the most optimistic timeline, measures included in the final rule to reduce risk to whales would not be in effect on the water until 2022 or later, and the right whale population cannot sustain more deaths in the interim.

Time is running out, but you can help the North Atlantic right whale population rebound by adding your voice.

Urge your government officials to take emergency action and create immediate fishing closures in areas where right whales are most prevalent while they develop stronger protections for North Atlantic right whales in the long term.

The North Atlantic right whale is critically endangered and needs immediate help to recover. It is NOAA Fisheries' legal responsibility under the Endangered Species Act and the Marine Mammal Protection Act to protect right whales from injury and death in U.S. waters. The greatest threat to right whales in U.S. waters is entanglement in commercial fishing gear. NOAA Fisheries estimates that entanglement risk from lobster and crab fisheries needs to be reduced by 60-80%. The calculations in the Draft Environmental Impact Statement that show how NOAA Fisheries proposes to achieve that risk reduction rely on an old stock assessment using 2016 population estimates, whereas the most recent population estimates indicate the North Atlantic right whale has further declined to about 366 living whales. So, there is no question that the upper bound of the risk reduction target of at least 80%, which accounts for unseen whale mortalities, is required. The alternative measures that NOAA Fisheries released only achieve 60-69% risk reduction. Further, these risk reduction measures rely on ineffective gear modifications called "weak rope" that has not proven to reduce serious injury and death in whales. It is not worth the economic burden on the industry to change to this rope if there is no proven conservation benefit. The closures outlined in the proposed rule are too small and too short in duration. Specifically, the closure south of Nantucket and Martha's Vineyard should be year-round since right whales have been present nearly every month of the year, in this area, for the last several years. Simply, NOAA Fisheries' proposed rule does not do enough to save the right whale from extinction.

On the most optimistic timeline, the measures included in the final rule to reduce risk to whales would not be in effect on the water until 2022 or later. While this rule is revised, finalized, and implemented, NOAA Fisheries must immediate implement emergency action designating a year-round closure south of Martha's Vineyard and Nantucket and three areas in the Gulf of Maine that would be closed seasonally to fishing gear using vertical lines in the American lobster and Jonah crab fisheries. Targeted vertical buoy line closures where right whales interact with heavy, lethal fishing gear are the fastest and most effective management tools to prevent unlawful deaths and extinction of the North Atlantic right whale. Closures in offshore areas would also minimize impact to fishermen, since the majority of lobster fishing occurs closer to shore.

The North Atlantic right whale can recover if NOAA Fisheries takes swift, effective action to protect right whales from the vertical buoy lines that entangle and kill them. The proposed rule must be revised, and the final rule must meet the level of risk reduction required by the most recent scientific information. In the meantime, NOAA Fisheries must immediately implement closures to lobster and crab fishing with vertical buoy lines, in the areas where right whales concentrate, and help prevent the extinction of this iconic species.