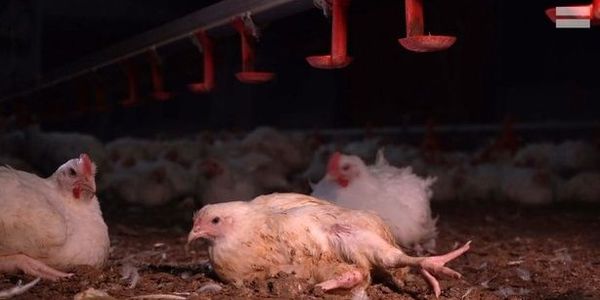 Chickens Are Bred To Grow So Large Their Legs Crumble and Break Under Their Own Weight!

The current pandemic has brought to light the weaknesses, inadequacies, and, in many instances, cruelties of the meat industry -- issues that stretch well into the past, far before the introduction of the novel coronavirus, and threaten to persist into the future if we do not act.

In March of 2020, horrific footage was released depicting what really goes on behind the closed doors of the poultry industry. Video captured chickens on a farm in Spain as they lay dead or dying, struggling to stand, breathe, or even move. Bred to grow unnaturally large and pumped full of antibiotics, these poor animals' bodies cannot withstand the rapid weight gain forced on them or the unhygienic conditions they are forced to wallow in. Their miserable lives will be spared when they are slaughtered and their meat is sent to retailers. But it does not need to be this way.

Sign the petition if you want to demand that all Spanish food retailers adopt a transparent labeling system so that consumers will know exactly what level of welfare their chickens received! This will allow consumers to easily use their money to only support humane treatment of animals.

The footage, shared by animal rights charity Equalia, is distressing. Chickens are packed so tightly into their barns that they have barely any room to move. That, unfortunately, matters little, as it appears that a huge amount of these animals cannot move for other reasons. Selective, inhumane breeding expedites the chickens growth -- after all, more meat produced at a rapid rate means higher profits for their owners. But it comes at a price, for the chickens and for consumers everywhere.

Crushed by the weight they unnaturally and quickly gained, many chickens cannot even stand. Some are seen with mangled or broken legs sticking out at grotesque angles. Immobility can lead to painful skin diseases, and risk of illness is heightened since the chickens are forced to lay in their own urine and feces. Lung and heart diseases, related to their hurried growth, kill many chickens prematurely.

To keep the chickens alive long enough to eventually slaughter and sell, farmers add antibiotics to the menu. Those antibiotics remain when the chickens are processed and sold, thus increasing the likelihood of antibiotic resistance in bacteria that cause deadly infections in humans. These live-saving medicines are being used to turn chickens into dividends, and it might end up costing human lives.

If more people knew these details, exposing the lack of welfare in the poultry industry, they would probably be less keen to support it. If we allow consumers to dictate the terms of the meat industry by making informed purchases, we can attain a better quality of life for the animals, humankind, and the environment. In France, a transparent labeling system was "designed to provide consumers with clear and systematic information on the level of animal welfare and farming method on products," and has seen great success. Heightened animal welfare in the meat industry is not only possible, but it is long overdue.

Please sign the petition and demand that all Spanish food retailers commit to the transparent labeling of their chicken products, making animal welfare levels clear to consumers!

Care2
Chickens Are Bred To Grow So Large Their Legs Crumble and Break Under Their Own Weight!
COMPARTILHARTWEET