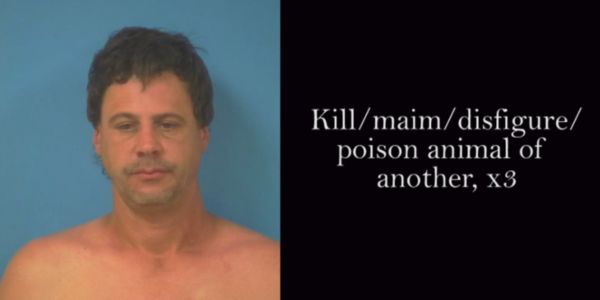 On May 13, 2019, CLIFFORD PAPPAS shot 3 of his wife's dog's with a 45 caliber pistol because he felt she was cheating on him. All died, 1 suffered for 5 days before passing. PAPPAS sent numerous threatening text messages to his wife prior to shooting her pets stating he was going to kill her animals including her horse. Police arrived after shots were heard and stopped him from shooting her horse. Pappas was arrested and charged with possession of a firearm under the influence of alcohol, perjury, three counts of torture, maiming, or killing an animal, in order to threaten or terrorize, three counts of killing, maiming, disfigure, or poison an animal of another, and two counts of discharging a gun within a structure. One dog was shot in its bed next to the wife's bed, another in the living room and the 3rd in the front yard in close proximity to an elementary school.
The Nye County District Attorney charged PAPPAS in total with 3 counts of Felony Animal Cruelty/Torture. PAPPAS was offered a plea deal that if he pleads "Guilty" to one charge the others would be dropped. On July 1, 2019, PAPPAS plead guilty to 1 felony count of animal cruelty/torture and is scheduled to be sentenced on August 26, 2019, in Nye County District Court, Dept. 2- Judge Robert Lane, Presiding.
THE ACTIONS OF CLIFFORD PAPPAS PRESENT THAT HE IS A DANGER TO THE COMMUNITY, ITS ANIMALS AND HIS WIFE. PAPPAS STATED THAT HE WAS JUSTIFIED IN KILLING HER DOGS. WE ARE OUTRAGED AT THE ACTIONS OF CLIFFORD PAPPAS AND DEMAND THAT HE RECEIVE SUBSTANTIAL PRISON TIME WHEN SENTENCED. THE AGGRAVATING FACTORS BEING (1) THE TORTURE OF 3 THE ANIMALS (2) INNOCENT PEOPLE COULD HAVE BEEN SERIOUSLY INJURED NEARBY AND THERE IS AN ELEMENTARY SCHOOL ACROSS THE STREET (3) ONE DOG SUFFERED FOR 5 DAYS BEFORE DYING. (4) THE CRIMINAL ACTIONS OF PAPPAS WERE PLANNED AND CALCULATED (5) HE PRESENTS NO REMORSE, NO GUILT. (6) PAPPAS COMMITTED MORE CRIMES IN HIS ACTIONS ABOVE THAT COULD HAVE BEEN FILED AGAINST HIM. (to name a few- Aggravated Stalking, (a felony) Possession of a firearm while under the influence, Firing a weapon in an inhabited dwelling) and others. (see arrest charges)
CLIFFORD PAPPAS SHOULD RECEIVE A MAXIMUM PRISON SENTENCE TO THE 1 COUNT OF FELONY ANIMAL CRUELTY, UNDER NRS 574.100, (Nevada Revised Statutes) , A CATEGORY D FELONY. (1 TO 4 YEARS)
Case references and back up: