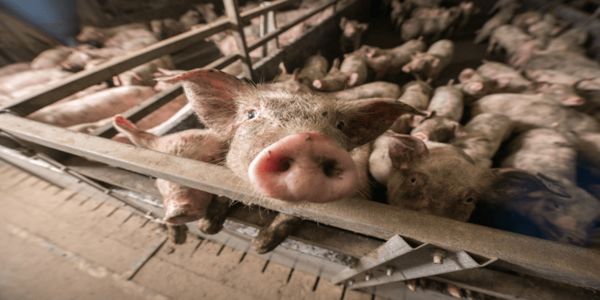 Tell your representative: Sponsor the Farm System Reform Act to phase out factory farming by 2040

What's happening to pigs, chickens, cows, and other animals on factory farms hurts all of us.

99% of the meat eaten in the US, almost 10 billion animals a year, comes from animals housed in factory farms, also known as Concentrated Animal Feeding Operations (also known as CAFOs).

Not only are factory farms a major cause of climate change -- they pollute our air, contaminate water, and destroy biodiversity.

They're also cruel. The animals raised on these farms are kept in cramped, unsanitary conditions deprived of a natural, fulfilling life. This crowded environment is a major human health hazard, too, increasing public health risks like new zoonotic pandemics (such as COVID-19), antibiotic resistance, and more. Now that we are living the consequences of a global pandemic, we can't wait any longer for change. Factory farming is an urgent health, justice, environmental, and ethical issue.

Fortunately, it doesn't have to be this way. The Farm System Reform Act, introduced by Senator Cory Booker and Representative Ro Khanna, and co-sponsored by Senator Elizabeth Warren, is the first legislative step to halt factory farming's destructive practices and protect public health. The bill would immediately halt the construction of new or expanding large-scale factory farms while phasing out existing large factory farms by 2040. This could be huge.

Congress needs to hear from advocates like you that there's a better way for humans, animals, and our planet. Ask your representative now to support the Farm System Reform Act (S. 3221/H.R. 6718) and hold factory farms accountable for the harm they cause. We need to phase out these dangerous establishments but it's only possible with your help! Please sign today.

The Farm System Reform Act (S. 3221/H.R. 6718), introduced by Representative Ro Khanna and Senator Cory Booker, is the first step in major agricultural reform to protect public health from Concentrated Animal Feeding Operations (CAFOs) where deadly pathogens form and 99% of the meat eaten in the US is produced. Large, monopolistic farms have taken over the agriculture sector by swallowing up smaller farms, leaving fewer choices for consumers and creating a breeding ground for future pathogens because animals are cramped tightly together in severe, unsanitary conditions. We've long known that CAFOs pollute the air, contaminate water, and destroy biodiversity. But now that we are living the consequences of a global pandemic, we can no longer stand idly by without change.

The Farm System Reform Act would put an immediate moratorium on the construction of new or expanding large-scale factory farms while phasing out existing large factory farms by 2040. Please put the power back into small and medium-size farmers using safe and sustainable farming practices. We need to protect public health and phase out these dangerous monopolies.

As your constituent, I hope you'll cosponsor this critical legislation. This is the first giant step to a more compassionate, ethical, and sustainable food system.