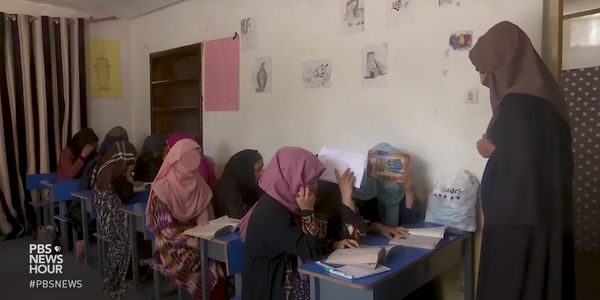 The Taliban Won't Let Girls Go to School. This Harms Everyone.

A little over a year ago, the Taliban took power in Afghanistan. Since then, human rights violations against women and girls have skyrocketed. Afghan girls ages 12 to 18 are still not allowed to attend school. It's estimated that more than a million girls have been banned from attending high school over the past year, according to the United Nations. This statistic alone is a tragedy, but it also creates a deep power and class imbalance for women and girls. It's imperative that the International Criminal Court (ICC) take action against the Taliban for the harm it's doing to women and girls by restricting their access to education.

Sign the petition to demand the ICC investigate the Taliban for its crimes against humanity regarding women and girls.

Research shows that a core component of eradicating global poverty is giving girls access to education. In addition to the higher risk of poverty, uneducated girls are also at greater risk of child marriage, violence, and prone to diseases.

In less than a year, the Taliban have destroyed any rights that Afghan women and girls had gained. And the danger continues. Just last month, a suicide bomb attack at a school killed dozens of students preparing for University exams. Most of the victims were young women.

On the anniversary of the Taliban taking control of Afghanistan, 50 Afghan girls sent a letter titled, "A Year of Darkness: A Letter from Afghan girls to heads of Muslim countries and other world leaders."

"The past year, we have been denied human rights, such as the right to attain an education, the privilege to work, the liberty to live with dignity, freedom, mobility and speech, and the right to determine and decide for ourselves," said Azadi, an 18-year-old 11th-grade student.

Sign the petition to demand the ICC investigate the Taliban for its crimes against humanity regarding women and girls!

Care2
The Taliban Won't Let Girls Go to School. This Harms Everyone.
DELATWEET