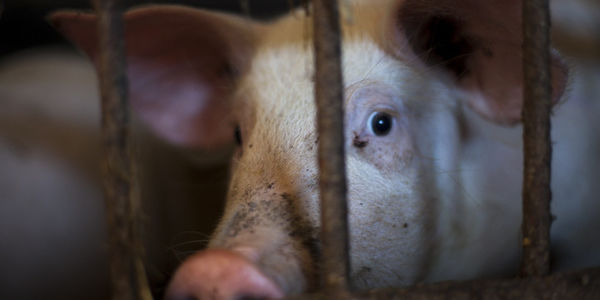 Smithfield Foods said they would improve their pigs' lives. But after everyone looked away, the cruelty continued

The tight-fitting metal cage suddenly surrounds you. Your heart starts to race as your breathing becomes fast and shallow. Your mind turns fuzzy and blank, realizing there is no escape. This feeling is panicked desperation. And this is what mamas-to-be experience every day in factory farms. Mama-to-be pigs, that is. And it's all due to the hideous use of gestation crates.

Sign the petition to demand that Smithfield Foods removes all gestation crates from its facilities!

What are gestation crates? They are extremely tight-fitting metal cages that enclose pregnant pigs, known as sows, while they are "with piglet." Mama-pigs-to-be live for approximately four months at a time in these nearly form-fitting crates, in which they have almost no room to move. The cages are so cramped, the sows cannot turn side-to-side or around, and are barely even able to stand up and sit down. Their excrement piles up beneath and around their legs, and the sounds of animals in pain fill the air all around. The trauma this breeds is immense.

Then, once the mama gives birth to her new litter of baby piglets, the babies are torn away — and the mama is re-impregnated, and thrust back into her familiar, inescapable coffin of a cage. The average sow in this situation is forced to breed and produce more offspring for slaughter five to seven different times.

We might be used to the idea of these types of torturous Medieval enclosures for factory farmed animals, but consider if you yourself were told to live in one of these metal cages — and then, not just for one day, but for months.

Stuffing pregnant animals into such crates is also not the exception. It's the rule at factory farms. Of all the pigs raised for pork in the U.S., 95 percent come from factory farms. Numerous companies, including Smithfield Foods, have tried to fool consumers by making reassuring promises that they would phase out their use of gestation crates. But now, over five years later, nothing has changed. In other words: it was all just lip service. A lie.

Smithfield Foods, Inc. is the largest producer of pork not just in the U.S., but in the entire world. The corporation murders nearly 30 million pigs every single year. So for them to make such a promise — and to then break it — is especially cruel to the countless forcibly-impregnated mama pigs in their scream-filled facilities.

The only reason Smithfield ever made their (false, mal-intended) promise, though, was because of an outpouring of public outrage. If we can mobilize that public outrage again, Smithfield will realize the world is actually watching and that they have to do the right thing and follow through this time. We have that power!

Help us pressure the giant factory farming corporation Smithfield Foods, Inc. to finally end its use of all gestation crates! Sign the petition!
Sign Petition
SHAREShare With FriendsTWEETEMAILEMBED
Sign Petition
See more petitions:
You have JavaScript disabled. Without it, our site might not function properly.

Care2
Smithfield Foods said they would improve their pigs' lives. But after everyone looked away, the cruelty continued
SHARETWEET