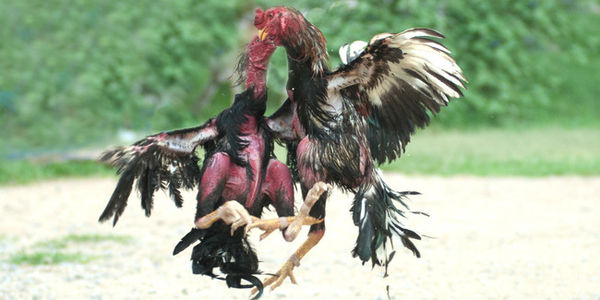 Cockfighting is a brutal and bloody "sport." Demand that Oklahoma shut down these nasty fights, now!

Almost twenty years ago, the state of Oklahoma banned cockfighting — the sadistic "sport" in which two roosters, or "cocks," are pumped full of steroids, fitted with knives or other sharp objects, and pitted against each other to fight to the death.

To anyone who hasn't seen this disturbing tradition in practice, this might seem like hyperbole. But unfortunately, it's not.

Sign the petition to demand that Oklahoma enforce its anti-cockfighting laws now!

Rooster handlers literally breed birds specifically for these events, selecting the most aggressive animals and then actually training them for months. Finally, when they deem the birds ready to battle to the death, the trainers pluck out the animals' feathers, slice off the fleshy folds under the animals' beaks (known as the wattle), and affix dagger-like weapons to the animals' bodies.

Then, two of these animals, confused, scared, and defenseless, are placed in a makeshift "ring" together. Within fifteen minutes, at least one of the animals will be so badly wounded or maimed that they will die. And this is all done just to entertain humans.

This is a particularly horrific practice, but unfortunately it's still extremely common in Oklahoma. And that's because officials have not cared to enforce the state's prohibition on cockfighting. In fact, because of authorities' lax interest in animal welfare, Oklahoma is not only home to a flourishing cockfighting industry — it's also the hub from which fighting roosters are sold and exported to trainers all over the world.

In fact, experts from animal welfare organizations have called Oklahoma the "cockfighting capital of the United States." It may even be the cockfighting center of the universe.

This isn't the kind of title that any state should hope for. It's time for Oklahoma to reinstate its commitment to animal welfare, and enforce its laws that ban cockfighting now!

Sign the petition urging officials in Oklahoma to finally get serious about cracking down on brutal cockfights and save animals from horrific suffering!
Sign Petition
SHAREShare With FriendsTWEETEMAILEMBED
Sign Petition
See more petitions:
You have JavaScript disabled. Without it, our site might not function properly.

Care2
Cockfighting is a brutal and bloody "sport." Demand that Oklahoma shut down these nasty fights, now!
SHARETWEET