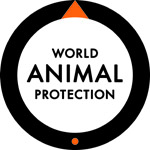 Be warned, this video shows some graphic and disturbing footage of animal abuse.

In Sweden and Finland, reindeer are subjected to immense suffering during large-scale round-ups and slaughter. A new investigative video from WSPA shows massive herds of reindeer being corralled, transported and slaughtered for their meat in Sweden.

The footage details the immense suffering and extreme fear inflicted upon the reindeer at every stage of the increasingly-commercial process as the reindeer are frightened, mishandled and physically harmed -- all of which is contrary to existing animal welfare laws in both countries. This cruelty cannot be allowed to continue.

In 2008 the Nordic Council of Ministers adopted the Växjö Declaration, which stated the Council's belief that animals are sentient beings with their own intrinsic value and that they should be respected as such.

In the declaration the Council also stressed the importance of good animal welfare and the need for it to reflect the ethical values of its societies, reiterating the pioneering traditions of the Nordic region
and based on a deep insight into the links between animal health and animal welfare.

The World Society for the Protection of Animals (WSPA) has recently documented round-ups, transportation and slaughter of reindeer in Sweden and Finland, which highlight a number of significant
welfare problems and practices that conflict with the values of the Växjö Declaration, European Union Directives and relevant domestic legislation.

Key findings from the investigation include appalling examples of the poor animal welfare inflicted on reindeer throughout the processes documented.

I urge the Nordic Council of Ministers to address this situation in line with the statements they made in April 2008, following the Växjö Declaration, which called on officials to look more closely at the welfare of animals in the food-production process.

These statements also confirmed that Nordic consumers expect food production to be based on good animal welfare.

Having seen WSPA's findings, which show the examples of poor welfare inflicted on reindeer, I want to reiterate that I -- and others, in the Nordic region and worldwide, continue to expect that a basis of good animal welfare is central to food production in the Nordic region.
Sign Petition
SHAREShare this petition with friends!TWEETEMAILEMBED
Sign Petition
See more petitions:
You have JavaScript disabled. Without it, our site might not function properly.