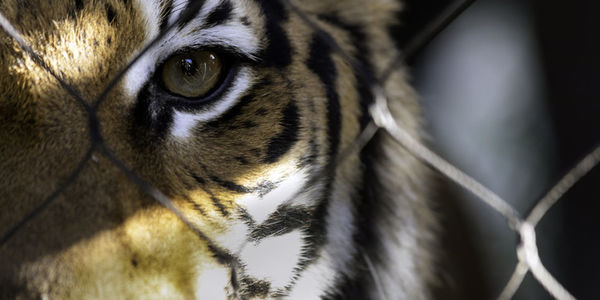 Twenty-three animals suddenly went missing from an abusive roadside zoo. Their owner won't say what happened to them.

Roadside zoos are horrible places that, by definition, are abusive to and exploitative of wild animals. Stolen from their expansive, lush natural environments, predators like lions and tigers are shoved into wire fence enclosures along with dozens of other animals, and left to fry under the scorching sun. Most of these animals are forcibly bred, and the second the mamas give birth, their baby cubs are stolen from them to become fuzzy props for photos.

All this, just to bring in curious — and well-paying — visitors.

Sign the petition to tell Indiana authorities to throw the book at these animal abusers!

One such horrible roadside zoo was the deceptively-named "Wildlife in Need" facility for tigers in Charlestown, Indiana. Its owner, Tim Stark, became a household name after the Netflix show Tiger King exposed the strange and corrupt world of big cat ownership in the U.S.

Stark kept upwards of 180 wild animals locked on the grounds, collectively worth hundreds of thousands of dollars or more. Animal rights activists spent years reporting Stark for the abuse and neglect that he heaped upon these poor animals. The evidence against Stark includes refusing to provide vital medications to his animals; trapping 100 animals inside of a small enclosed trailer with no ventilation or air circulation for 36 hours (30 of which ultimately died as a result); and brutally murdering other animals. For approximately 20 years, animal lovers have been frustrated by his continual permission to operate the zoo.

That all changed in February 2020. That's when the U.S. Department of Agriculture (USDA) revoked Stark's license to operate the facility. Several months later, in September 2020, authorities arrived to remove Stark's animals and rehouse them more suitably. They were able to remove 160 of those captive critters. But 23 animals were mysteriously missing. Along with Tim Stark himself, they were nowhere to be found.

Stark spent weeks hiding out from law enforcement until an anonymous tip revealed his whereabouts. But even after officials apprehended the animal-exploiter, the 23 animals remained missing. Stark refused to disclose what befell these 23 souls, claiming ignorance.

Many now fear the worst. We know that his one-time friend, Joe Exotic, shot and killed many of his animals once he realized the authorities were going to crack down on his abusive zoo operations. We can only hope that Stark's animals were spared a similar fate. But we have to know the truth.

Demand that Indiana officials charge Tim Stark for the "disappearance" of 23 exotic wild animals and continue to investigate until they uncover the truth!
Sign Petition
SHAREShare this petition with friends!TWEETEMAILEMBED
Sign Petition
See more petitions:
You have JavaScript disabled. Without it, our site might not function properly.

Care2
Twenty-three animals suddenly went missing from an abusive roadside zoo. Their owner won't say what happened to them.
SHARETWEET