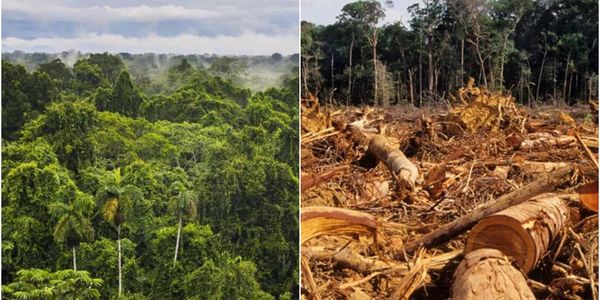 SAVE THE AMAZON RAINFOREST!

The Amazon, the largest tropical region on the planet, loses huge tracts of forest every year, emitting large amounts of greenhouse gases in a context of violence and human rights violations. If we want to avoid a worsening of climate change, the loss of its rich biodiversity and guarantee the survival of indigenous peoples, it is essential to stop the deforestation and degradation of the Amazon.
Our diet has a lot to do with what happens in the Amazon. The expansion of soybean cultivation in Brazil is largely due to the international demand for feed that industrial livestock needs to feed chickens, pigs, cows, etc. that are part of our diet excessively rich in protein of animal origin.

There are also Spanish companies responsible for the conflict that exists in the Amazon region. Power companies and insurance companies are trying to do business with these destructive projects. In addition, the Spanish tropical timber market bears a great responsibility, since Spain is also one of the largest European importers of tropical Amazonian timber. The demand for valuable woods, such as ipé, fuels fraud and corruption in the forestry sector. Spain is, within the EU, one of the main importers of ipe wood, contributing not only to the destruction of the Amazon but also to the invasion of indigenous territories or slave labor.

Brazil is the country that is home to most of the Amazon rainforest, but deforestation and forest degradation is a chronic problem. The expansion of the agricultural frontier for the creation of pastures for livestock and soybean cultivation is the main cause of this problem. Also, industrial logging, largely illegal, opens the way to subsequent destruction through the use of fire. Another great threat is the large hydroelectric projects that threaten the valuable rivers of the Amazon basin.

The Solutions:
Companies and governments must assume their responsibilities as the main responsible for the destruction of the Amazon and must:

*The Government of Brazil must commit to implement a zero deforestation policy and fulfill its international commitments on the environment and the rights of indigenous peoples.

* The administrations, through public procurement, must prioritize those products that are not associated with the destruction of forests or the violation of human rights against the communities that inhabit them.

*Citizens must adopt sustainable lifestyles and consumption, avoiding unnecessary consumption, the waste of resources and making a conscious purchase committed to the planet and human rights.

*Among the necessary lifestyles, it is necessary to mention the need to adopt a diet low in animal protein where plant-based, organic and local foods predominate. We have to consume less and better quality meat, discarding products from intensive systems and supporting local livestock farming in an extensive and ecological system.

STOP The expansion of the agricultural frontier for the creation of pastures for cattle ranching and the cultivation of soybeans in the Amazon.

Care2
SAVE THE AMAZON RAINFOREST!
SHARETWEET