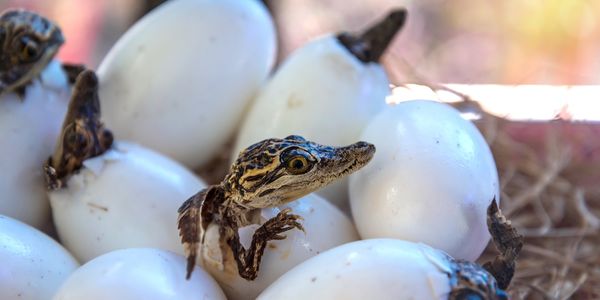 Fashion brand Hermès is building a facility just to factory farm crocodiles who will be skinned for bags and shoes!

Hermès, the French fashion brand, wants to build a new facility in Australia where 50,000 crocodiles would be born into captivity never knowing freedom just to be cruelly skinned and turned into expensive handbags and shoes.

Tell Hermès that we care more about innocent animals than their overpriced, non-essential, and completely gruesome products! Sign the petition demanding that they halt these plans at once!

It's not too late to stop this nightmare. While the project has already been granted development and environmental approvals -- who knows why the bloody death of thousands of crocodiles is okay for the environment -- it is still just in the proposal stages. We are joining other animal welfare groups in their cries for this to go no further.

Here's the fashion brand's plan: steal eggs from mother crocodiles in the wild, causing a ripple effect of fear, stress, and aggression. Then, once the eggs hatch within the factory farm walls, raise those tiny baby crocodiles to be submissive and spiritless -- the exact opposite of how they would behave in the wild -- lest their precious skin get damaged making it impossible for Hermès to use. They are kept in tight concrete enclosures that restrict their movement and provide no stimulation. Once the crocodiles have grown big enough in these inhumane conditions, their skin is ready to be harvested.

On other crocodile factory farms, PETA has reported these gruesome methods of murder: the poor crocodiles are electrocuted. Their bodies shake and protest wildly. This may kill them, or they could be unlucky enough to still be alive as their necks are slit and then metal rods are rammed down their spin in an attempt to finish them off. Some still take a long time to pass, and have even been witnessed moving, still alive, as the skinning begins.

Hermès says it "has defined and implemented a very strict, science-based, animal welfare policy." Does that sound like what we described above?

Their fear and pain is not fashion. Other brands such as Chanel, Vivienne Westwood, and Mulberry have banned exotic animal skins in their products and have opted for vegan alternatives that look exactly the same -- all that's missing is the blood on their hands.

How long will Hermès accept the blood on theirs? Tell them it's not too late to join the right side of history. Sign the petition demanding that they abandon the proposed facility in Australia, and ban the use of exotic skins from its products completely!

Care2
Fashion brand Hermès is building a facility just to factory farm crocodiles who will be skinned for bags and shoes!
SHARETWEET