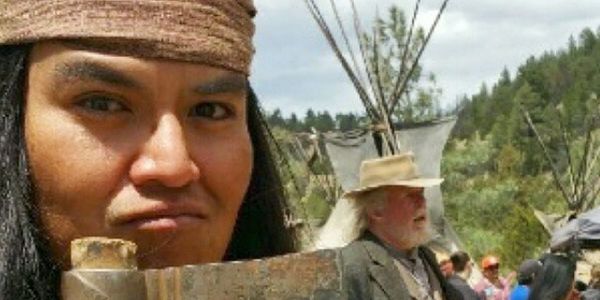 The script for Adam Sandler's next movie contains numerous jokes mocking American Indians. A dozen Native extras walked off the set of "The Ridiculous Six," a Netflix-produced spoof of the classic "The Magnificent Seven," in protest.

I am Navajo, and I was one of those background extras who walked away from this production.

Sandler's so-called "jokes" include naming Indian women "Beaver Breath," "Never Wears Bra," and "Sits-on-Face," rhyming "tee-pee" with "pee-pee", and having white men toss an alcoholic beverage at an Indian woman passed out on the ground, even while alcoholism, sexual assault, and violence against women continue to ravage real reservations.

When the film's producer learned that we didn't appreciate being stereotyped this way, he was snapped, "If you guys are overly sensitive, you should leave." So we did.

I was blessed with the opportunity to earn my BA in Film & Media Studies at Dartmouth College. This rich education has given me the knowledge, expertise, and tools to identify these problematic issues and to be a strong voice for my people. I want to speak up for our Indigenous youth who are deeply impacted by these negative stereotypes that are too often perpetuated in film and media. It is my goal to bring about change in the film industry and make room for Native American talent to tell our own stories - stories about a people who actually still exist today in the 21st century.

Sign my petition: The producer must be removed from the film, and Adam Sandler must remove jokes mocking American Indians, especially American Indian women, from his script!

I stand with the American Indian actresses and actors who walked off the set of Adam Sander's new movie. Comedy doesn't have to hurt whole classes of people to be funny. True satire doesn't perpetuate stereotypes - it mocks them! That's why you must fire the "Ridiculous Six" producer who told Indians to quit if they didn't like being mocked and stereotyped by white writers, and remove those jokes from the script.