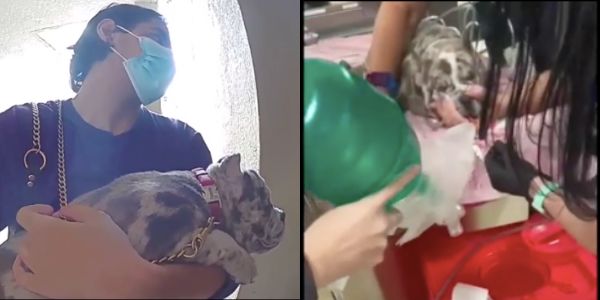 This Pet Grooming Business Has Been Accused of Multiple Instances of Animal Abuse, Demand an Investigation!

When we hand over our dogs to be groomed, we are entrusting not only their hygiene but also their lives to groomers. And most of the time, these people are animal lovers who go above and beyond to take care of our beloved pets. That's why it's so distressing to learn that this grooming business in Florida has been accused of substantial abuse over many years and they are somehow still operating! In addition to alleged abuse, several animals have died in their care or shortly after returning home.

Sign the petition to tell Florida officials to finally investigate the company and close them down if they are harming pets!

Karma was a darling 5-month-old American bulldog whose owner Charles adopted her after losing his job due to the pandemic. On April 27th, 2021 Karma was sent to MaryEli's Lovely Pets and when they returned with her, her body was limp and blood was pouring out of her nose. Karma's family rushed her to the vet where they tried to get fluid out of his lungs. Karma had been a healthy, happy puppy but ultimately had to be euthanized after this trip to the groomers.

"Doctors determined she had respiratory distress allegedly due to causes such as strangulation, near drowning, upper airway obstruction, prolonged seizure activity, or electrocution." Accidents happen, but every single one of these possibilities would either be caused by a human or should have been noticed by one in time to get medical care.

Karma is not the only animal alleged to have been hurt or killed at MaryEli's Lovely Pets. Sasha is a 9-year-old Pomeranian whose hip was dislocated during her grooming session with the company! When Sasha was returned to her family, she was limping and had blood on her mouth. What kind of groomer is so rough with a dog that they dislocate its hip? Either the workers are not properly trained or simply do not care. Either way, this business must be investigated immediately before any more harm comes to animals!

Sign the petition to demand MaryEli's Lovely Pets is investigated immediately for animal abuse and shut down while the investigation goes on!

Sasha and Karma are just two recent victims, but the business has allegations of animal abuse including cutting cats and dogs during grooming, harming a bird so bad it came home bloody and another death in their care during 2019. These are all on Google reviews and apparently the business has also changed names multiples times, which seems especially suspicious given the allegations!

Care2
This Pet Grooming Business Has Been Accused of Multiple Instances of Animal Abuse, Demand an Investigation!
SHARETWEET