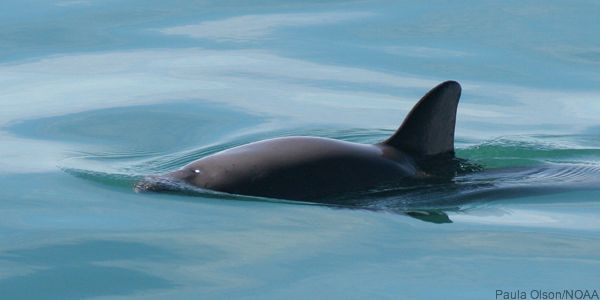 Call for Sanctions to Save the Vaquita Porpoise from Illegal Fishing

The critically endangered vaquita - a tiny porpoise inhabiting Mexico's Gulf of California - is teetering on the brink of extinction. Only 97 vaquita remain, down from 200 in 2012, and scientists say the porpoise may be extinct by 2018.

Entanglement in fishing gear is the greatest danger to vaquitas, especially in fishing nets set for another endangered species called the totoaba, a giant marine fish. It's illegal to fish or export totoaba, but there's a growing black market for the fish's bladder, which is used in China to make a supposedly fertility-boosting soup. A single totoaba bladder can sell for $14,000 -- a business so lucrative that Mexican drug cartels have joined the totoaba bladder trade.

Mexico must step up and stop the illegal totoaba trafficking, before it drives two species -- the totoaba and the vaquita -- to extinction. Tell the Obama administration to use its full authority to sanction Mexico for failing to take strong and immediate enforcement action.
read petition letter ▾
Dear Secretaries Pritzker and Jewell,

I am writing to request that the Obama administrative take strong and immediate action to stop Mexico's illegal totoaba fishery and trade. Mexico's growing black market in this endangered fish must end now or it will drive both the totoaba and the critically endangered vaquita porpoise extinct.

As you are aware, the totoaba is a large, critically endangered fish found only in Mexico's Gulf of California. Because the totoaba is endangered, fishing and trade in totoaba is banned -- but a surging black market has developed in response to Chinese demand for the fish's swim bladder. The bladder is used to make “buche” soup, believed to boost fertility and improve skin, and a single bladder reportedly can sell for $14,000 U.S.

Sharing the totoaba's habitat, the vaquita is one of the world's most endangered species. This tiny porpoise has suffered a dramatic decline in numbers -- dropping from 200 in 2012 to just 97 vaquita in 2014. Fishing gear presents the vaquita's greatest threat, and vaquita are often entangled in illegal gillnets set for totoaba. In July 2014 a group of eminent scientists urged Mexico to “immediately” take “drastic steps” to avoid the vaquita's otherwise imminent extinction, including the use of “all available enforcement tools” to stop illegal totoaba fishing and trade.

I ask that the Obama administration follow this advice and do everything in its power to save both the vaquita and the totoaba. By allowing the continued, illegal trade in totoaba, Mexico is violating international law. The United States has full authority under the Pelly Amendment to issue trade sanctions against Mexico until it complies with its treaty obligations.

Additionally, totoaba bladders are often smuggled across the Mexican border and into the United States before being shipped to China. The United States must stop this serious wildlife trafficking problem by increasing its own enforcement efforts at our borders. The administration must also pressure Mexico to clean up its shrimp fishery, which also entangles vaquita. The United States is a major importer of this shrimp and thus has a special responsibility to ensure Mexico meets minimum marine mammal protection standards.

Please act now to save these two imperiled Mexican species, the totoaba and the vaquita, from disappearing forever.