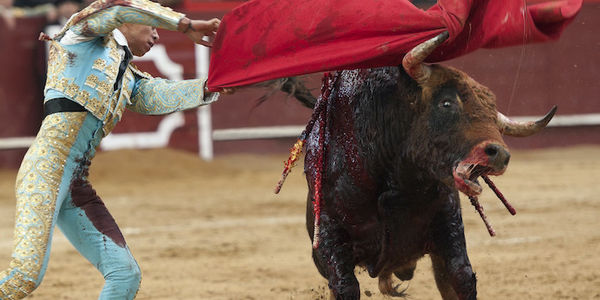 A French court said this animal torture sport was too popular to be banned. Stand up for the animals and end bullfighting, now!

Courts in the south of France have just decided the gruesome "sport" of bullfighting can continue on — because apparently the popularity of "local traditions" in Nîmes was more important than preventing cruelty against animals.

An animal welfare organization, the Société Protectrice des Animaux (SPA), had tried to stand against bullfighting in court, arguing that there was no sufficient rationale for preserving bullfighting that could be more important than protecting animals' wellbeing.

Luckily, there's a way to overturn this. Tell the federal government of France to step up and ban bullfighting nationwide!

Laws that ban animal cruelty already state that perpetrators can be punished by as much as €30,000 in fines and even two years in prison. But judges stated these anti-cruelty laws don't apply to the case of bullfighting because local Nîmes traditions are too important to be "disrupted." In fact, instead of levying fines against any of the bullfighting perpetrators, the SPA will be required to pay €3,000 for bringing the case to trial at all!

Interestingly, the judges did accept that bullfighting is unfair to the animals and subjects bulls to "significant suffering." Yet because bullfighting might potentially be "interest[ing]" to "a sufficient number of people," the court concluded: "we should retain the local tradition."

In fact, the tide is turning against bullfighting in both France and the rest of the world. Several years ago, in 2018, a poll conducted in France showed that around 74% of the public disapproved of bullfights when they resulted in animals' deaths.

Luckily, some members of the French government are already hard at work to make this matter right. In January of this year, multiple MPs came forward to suggest removing bullfighting from the protected category of "traditional" events. So far, though, this bill is not scheduled for a vote.

It's time for the French government to get with the times and promote animal welfare. Sign the petition to ban all bullfighting in the country of France!
Sign Petition
SHAREShare With FriendsTWEETEMAILEMBED
Sign Petition
See more petitions:
You have JavaScript disabled. Without it, our site might not function properly.

Care2
A French court said this animal torture sport was too popular to be banned. Stand up for the animals and end bullfighting, now!
SHARETWEET