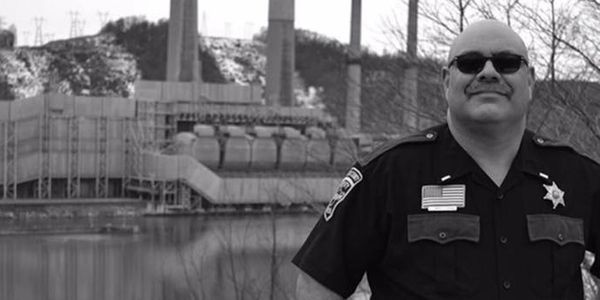 Mark “Hoss” Cowden, a man of great faith in God, a family man (married for 28 yrs. to his wonderful wife, Christal, and together they have two beautiful daughters, Elizabeth and Elise) and a retired lieutenant of 26 yrs. with the Hancock Co. Sheriff’s Office in WV.

Mark retired in 2015 and in January 2016, decided to run for county sheriff against the sitting sheriff. About a month before the primary election and because the sitting Sheriff believed he would be defeated, he conspired with the county prosecutor and an assistant prosecutor (Mark's sister-in-law) to contact a special US prosecutor to pass on information to the full-time US attorney about an incident Mark was involved in almost a year and a half prior with the promise that his sister-in-law would receive a promotion. She was subsequently promoted to full-time assistant prosecutor in Oct. of 2016.

This incident involved Mark having to restrain a highly violent male arrestee who was brought to the sheriff’s office after attempting to kill a WV State trooper just prior to his arrival. The FBI investigated this matter and used their illegal over-reach powers to brow-beat several deputies to lie about what they had witnessed by threatening federal prosecution if they didn’t recount what took place as the FBI instructed them to do.

Mark was subsequently indicted by a federal grand jury for excessive force and falsification of his incident report and the Obama administration brought in a special civil rights attorney whose only job it was to prosecute police officers. During the trial it was clearly shown on video that the arrestee resisted Mark which precipitated the necessity for Mark to restrain him. Mark had 2 expert witnesses, one a medical expert who is the head of neurology at WVU and a retired US Navy Capt. who ran a combat hospital in Kuwait who stated that Hoss put no injuries on the arrestee. The other expert witness was a nationally renowned use of force expert who testified that Mark acted appropriately with regards to the nationally recognized use of force continuum.

To Mark's surprise, as well as to the surprise of the majority of the citizens of Hancock County, he was still convicted of excessive force despite the fact that it was shown that two deputies lied in their testimony and a state police Sgt. admitted on the stand that he ordered the trooper who originally fought with the suspect to lie on his account of what took place. Mark was exonerated on the falsification charge.

After Mark's verdict, two unnamed federal prosecutors called his situation a miscarriage of justice and that the two federal prosecutors, Jarod Douglas of Wheeling, WV and Nicholas Murphy of Washington, DC intended to convict Mark, justice be damned, because they believed that Hillary Clinton would win the presidency and it would be a “feather in their caps” when being considered for promotions.

Mark has spent $70,000.00 in legal fees to date, and is in danger of losing his pension and desperately needs additional funds to file an appeal to this injustice.

Please stand with us and ask the good people of our country to send a message that “enough is enough!” Those who believe in true justice and support the efforts of law enforcement to protect and serve the citizens they love have the power to make right this travesty of justice by signing this petition that implores President Donald Trump to pardon Mark "Hoss" Cowden.

Mark and his devastated family would appreciate from the bottom of their hearts, and thanks all of you in advance for your insistence that our government serves us and does the right thing. May God truly bless you all for kindness and support.
read petition letter ▾

We the undersigned petitioners are united in our support, love and confidence in Lt. Mark Cowden for his service and devotion to the citizens of our nation during his tenure of 26 years as a deputy sheriff- a man of God who believed that he could change the world by using the abilities God gave him as his ministry to make life better to those who came to him in their time of need. We also want our government to know that Mark’s conviction that was contrived and based solely on political corruption from the local level all the way up to our federal judicial system was a personal affront to us as law abiding Americans and that has tarnished our system of government that we hold so sacred. We call on President Donald Trump, who we believe will do the right thing, to make good on his promise to be a “law and order president,” by righting this injustice not only for Mark, but for all those who call themselves Americans, by exercising his authority of presidential pardon to a man and a situation that it was truly intended to be used. We thank President Trump for his serious consideration in this matter and truly believe that he has the integrity and honor to restore justice to our sytem for which we rallied to elect him. Mr. President we implore you, might we dare say we demand of you, “HEAR OUR UNITED VOICES CRYING OUT FOR JUSTICE AND PARDON LT. MARK COWDEN!”