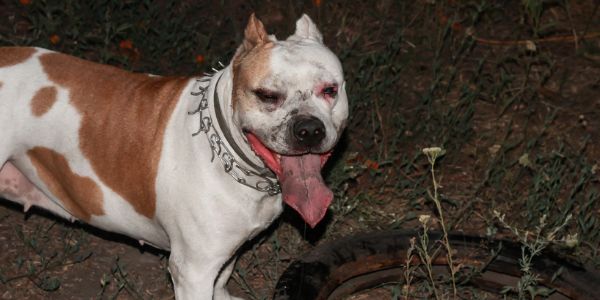 Dog fighting is one of the most heinous forms of animal abuse perpetrated by humans. Essentially, dogs are abused and neglected into becoming violent and are then forced to fight one another, often to the death. All of this is done for human entertainment, often with an aspect of gambling involved. It's so bad that the majority of the world has completely banned it. Yet it's still legal in virtually all of Russia and widely practiced.

The practice in Russia used to be more about proving which dog was superior for a working position like actual shepherding. But since the 1990's, there has been a huge influx in the import of pitbull terriers and the fights have become more like the nightmare you are probably imagining. Pitbulls can actually be lovely family dogs and in the past have been called nanny dogs for their good nature. Thanks to the prevalence of dog fighting, they have gotten a horrible reputation. But they are actually victims.

Some dogs are trained to fight other dogs by starvation and physical abuse. Other dogs are used as "bait dogs" for training purposes. Those dogs often have their teeth pulled out or their mouths taped shut so they don't stand a chance against their aggressor. Bait dogs suffer significant injury, psychological torture and even death. But so do fighting dogs. This "sport" is truly one of the worst things humans do and it must be ended completely.

The fights themselves can last up to 1-2 hours. That's 1-2 hours of dogs biting, clawing and attacking one another, all while human onlookers cheer. The fight usually ends when one dog cannot fight back, either because of injury or death. Death is not an uncommon ending. People make money doing this.

This blood sport is despicable and people who choose to participate in it must be held accountable. Right now in Russia there is really no way to do that because their animal rights laws are extremely weak. Sign the petition if you want dog fighting banned completely in Russia!