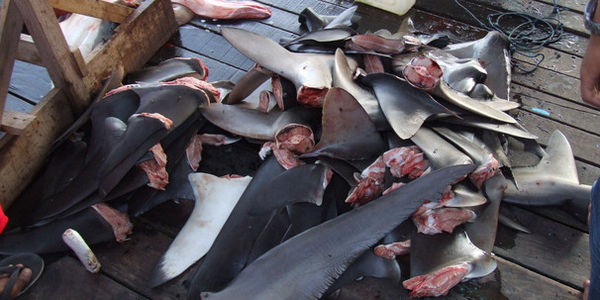 Singapore is the world’s second largest trader of shark fins after Hong Kong. In 2012-2013 alone, the city state exported $40 million and imported $51 million worth of the cruel product. Shark fins, like elephant skin, rhino horns and bear bile is used in traditional asian medicine as well as eaten as a delicacy.

Many of the sharks caught are considered threatened. They were yanked out of the water, their fins are sliced off while they are still alive and then tossed back into the ocean. Without their fins they don’t stand a chance and they quickly die or are devoured by other predators.

Sharks have evolved to be the ocean's apex predator. They keep prey fish “populations healthier by going after the old, sick and very young...and keep the population numbers of other species in proper balance.” And contrary to what you might think, a healthy shark population means actually improves fishermen’s harvest.

Shark Week - one of TV’s most anticipated events - is on now. This year, as you awe at these amazing creatures on screen, take a moment to think about this. 100 million sharks were killed last year alone.

The shark finning industry affects all of us, because the oceans belong to everyone. Singapore is participating in an industry that is quickly depleting our shark populations to unsustainable levels. These animals deserve to be treated with respect, not carved up while still breathing and jettisoned like trash.

This Shark Week, let’s tell Singapore the world is watching and ask them to do what is right and ban the harvest, consumption and trade of shark fins.