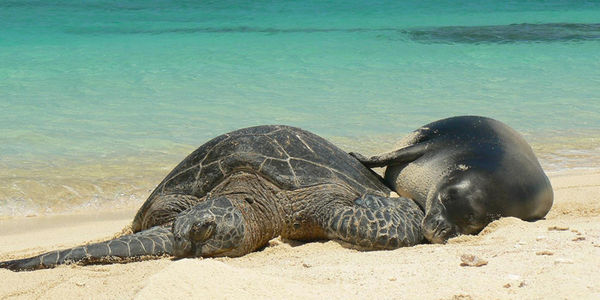 For Native Hawaiians, Papahānaumokuākea (pronounced pa-pa-hah-now-mo-koo-ah-keh-ah) refers to the sacred area from which all life springs. That's why it's no wonder that Papahānaumokuākea is also the Hawaiian name for the spectacular Northwestern Hawaiian Islands Marine National Monument.

Stretching for 1,200 miles across the north-central Pacific Ocean, the monument includes one of the most remote and relatively undisturbed coral reef systems in the world, and supports an astonishing array of marine life including monk seals, sea turtles, whales, dolphins, seabirds, sharks, billfish, and tuna. This sacred region also provides a critical setting for Native Hawaiians to access for spiritual communication and interaction with these resources.

When the monument was created in 2006 by the Bush Administration, it was a landmark event. Now, ten years later, President Obama must build on this conservation milestone by expanding this natural treasure.

Large, fully protected marine reserves are the strongest policy for protecting sharks and other marine life. The expansion will also safeguard valuable offshore open water areas, seamounts, submerged reefs, sunken islands, and banks while also protecting it as a spiritual and cultural place for future generations of Native Hawaiians.

Sign today and urge President Obama to expand the Northwestern Hawaiian Islands Marine National Monument to provide the greatest possible benefits to marine life and leave a legacy for his birthplace.

This app uses the We the People API, but is neither endorsed nor certified by the White House.
read petition letter ▾
Aloha President Barack Obama,

I write to you today in support of the Native Hawaiian proposal to expand the Papahanaumokuakea Marine National Monument. The expansion will protect offshore pelagic (open water) areas, seamounts, submerged reefs, guyots (sunken islands), and banks. Families of species that would benefit from an expansion of the monument include monk seals, sea turtles, whales, dolphins, seabirds, sharks, billfish, and tuna.

Large, fully protected marine reserves are the strongest policy available for protecting populations of sharks and other marine life. A huge swath of protected ocean will ensure that sharks are protected as long as they are swimming inside the protected area's borders.

Native Hawaiians consider the ocean a deity, or god, and a host to numerous marine and avian life. They have an ongoing relationship with the biocultural resources of Papahānaumokuākea. This sacred region provides a critical setting for Native Hawaiians of all generations to access for spiritual communication and interaction with these resources.

Please expand the monument to the full extent of the U.S. EEZ surrounding the Northwestern Hawaiian Islands, but excluding the areas around Ni‘ihau and Kaua‘i. Please ensure the monument is as large as possible to provide the greatest possible benefits to marine life and leave your birthplace a legacy for future generations.