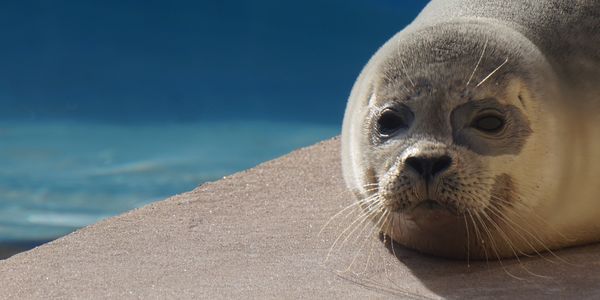 This Seal, Neglected for Years, Can Barely Move Under a Thick Layer of Seaweed Covering Its Entire Body

When you first see it, whether in person or in the heartbreaking pictures circulating on the internet, you'll probably mistake it for something else -- a clump of floating seaweed, or a rock covered in sea plants, algae, and grime. But upon closer inspection, the matted ocean vegetation is actually covering -- rather, choking and restricting -- a poor seal.

Slowly the whole picture comes into view. One of the animal's eyes is swollen and most likely infected, the other shadowed under a shoot of seaweed that seems to be lodged painfully into the seal's pores. Its flippers scrape the bottom of its filthy enclosure, which contains barely enough water to cover the marine mammal. But the rest of the seal is totally concealed under pounds and pounds of heavy, tight, painful seaweed.

The condition that this seal is in can only be a result of years of neglect. The Mini Zoo in the Magdalena Peninsula in Santander, Spain, where the seal miserably lives, can clearly not be trusted to care for any animals. Please sign the petition and demand that the zoo be shut down at once, and all of its animals be sent to sanctuaries!

The mayor of the area where the zoo is located claims that the photos were "taken out of context." But there is no context that would make the condition of the seal acceptable. This zoo has apparently been accused of mistreatment of other animals, too. But frankly, the treatment of this poor seal is enough to prove that they should be shut down. Zoos are precarious environments -- caging and displaying wild animals for economic gain and human entertainment almost always leads to exploitation and abuse. This, sadly, is further evidence to that point.

Please sign the petition if you think the Mini Zoo in the Magdalena Peninsula should be shut down immediately, and that it be arranged for all of their animals to get the proper care they need in sanctuaries!

Care2
This Seal, Neglected for Years, Can Barely Move Under a Thick Layer of Seaweed Covering Its Entire Body
SHARETWEET