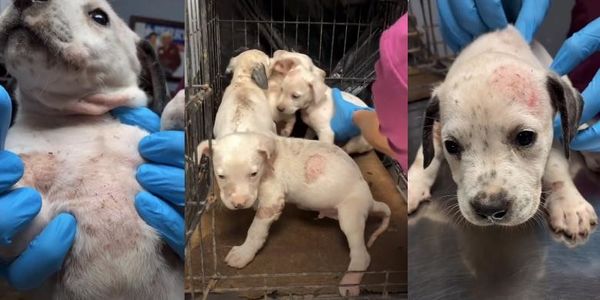 These four parasite-ridden puppies were abandoned at a Texas vet's clinic. Pet parents should know their responsibilities!

One early September morning, a Texas veterinarian pulled up to his office to discover something unexpected: a metal wire cage filled with four little baby puppies, abandoned and left for him to care for.

Worse still, once he took the puppies into the building, he and his staff found the animals were in a poor state, medically and physically. All four animals were covered in skin lesions, ringworm fungus, and fleas. They also had missing patches of fur all over their bodies -- on toes, arms, even their faces. On top of that, their feces showed they were also suffering from intestinal parasites.

Such a high level of neglect doesn't just happen overnight. Whoever dumped these poor animals on the vet's front step probably did these dogs a favor by finally surrendering them. But these former owners should have contacted a shelter, and done so much, much sooner -- before the animals ended up in such a sorry, sad way.

Sign the petition to demand that Texas require all pet owners to sign a contract indicating an understanding of their responsibilities as pet parents! And authorities should also educate the public to surrender unwanted animals at shelters -- not at veterinary clinics.

In a TikTok video that's since gone viral, the vet shows viewers exactly what it looks like when a puppy is in such a bad condition, and walks us through the process of getting the pups healthy again.

This vet is already trying to find and identify the people who abandoned the animals at his office. It was extremely upsetting to him and his staff to see that someone showed so little regard for these sweet creatures' lives and well-being. We're grateful to him for all his work to heal and take care of these sweet puppies! But the larger issue is that they ever wound up so badly medically neglected in the first place.

All pet stores, shelters, breeders, and other sources of puppy adoption sites should make sure pet parents know what their responsibilities are when they take on a new pet. If people cannot care for animals, at least it would be better for them to realize a fact like that in advance, in order to spare the animals a lot of pain and suffering.

If you want to help puppies and other pets that are neglected, abandoned, or abused, sign the petition now!
Sign Petition
SHAREShare this petition with friends!TWEETEMAILEMBED
Sign Petition
See more petitions:
You have JavaScript disabled. Without it, our site might not function properly.

Care2
These four parasite-ridden puppies were abandoned at a Texas vet's clinic. Pet parents should know their responsibilities!
SHARETWEET