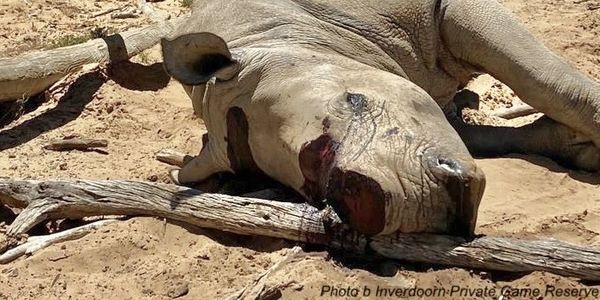 Twenty-Four Rhino Corpses Were Found Within 14 Days, Each With Their Horns Hacked Off of Their Decomposing Faces

A string of poaching massacres has broken out across South Africa, with poachers largely targeting rhinoceroses - murdering 24 animals and targeting even more within the span of just 14 days. This includes seven rhinos killed on the property of Kruger National Park, and one pregnant mama in the Western Cape.

Two rhinos survived the string of massacres - despite being shot and one even enduring its horn hewn off its head, leaving an empty, bloody stub on its face. This poor animal experienced the trauma of this severing while it was still alive, feeling every hack of the saw across its head.

Authorities have already arrested 9 alleged poachers, but more are still out there. The South African government has been quick to address this burst of murders, and we have to make sure they get all the resources they need in order to bring these animal-murderers to justice. Sign the petition to demand international cooperation to find these poachers!

Poachers are after the rhinos' horns, which are used to show off one's wealth and status, as well as to prepare some traditional medicines. Rhinos are vulnerable animals, with their numbers having plummeted to around only 27,000 animals left - down from approximately 500,000 around 100 years ago. And their numbers just keep dwindling further as these animal hunters go out and hack up the poor creatures, just to possess one of their body parts.

On average, poachers in South Africa claimed the lives of more than one rhino each day in 2020, for a total of at least 394 butchered rhinos. But even that doesn't compare to this rash wave of killings from early December 2021.

Many private groups are coordinating with the South African Department of Forestry, Fisheries and the Environment (DFFE) to help heal the two surviving rhinos. Now global countries must also aid in the fight, and provide the South African government with any necessary resources to help them track down these blood-stained poachers!
Sign Petition
SHAREShare this petition with friends!TWEETEMAILEMBED
Sign Petition
See more petitions:
You have JavaScript disabled. Without it, our site might not function properly.

Care2
Twenty-Four Rhino Corpses Were Found Within 14 Days, Each With Their Horns Hacked Off of Their Decomposing Faces
SHARETWEET