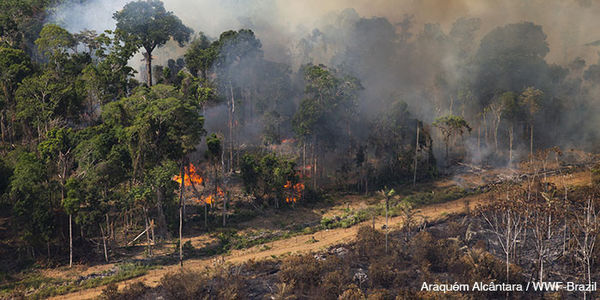 Congress: Act For Forests By Tackling Deforestation and Habitat Loss

The new Congress is preparing to take bold legislative action on climate change and COVID-19 response, and we need to remind policymakers that deforestation and habitat conversion are at the root of some of the most pressing problems threatening our planet.

New studies reveal that more than 166,000 square miles of forest habitat — an area roughly the size of California — were lost to deforestation in the tropics and subtropics between 2004 and 2017. Nearly two-thirds of this loss occurred in Latin America — with the Brazilian Amazon experiencing the most devastation.

While the challenge seems unsurmountable, there are solutions we can work towards. It's vital that the United States partner with countries to prevent deforestation and nature loss and protect biodiversity hot spots such as the Amazon from destruction.

Will you ask your representative to take action to end deforestation worldwide and increase funding to protect biodiversity strongholds like the Amazon?
read petition letter ▾
Dear Representative/Senator:

Deforestation and habitat conversion are at the root of some of the most pressing problem threatening our planet. Deforestation is the leading cause of decline in wildlife populations and a major contributor to climate change. The destruction and fragmentation of forests and other natural ecosystems are also some of the biggest underlying risk factors for outbreaks of emerging infectious diseases and are primary reasons why wildfires are more frequent and devastating in critical ecosystems such as the Amazon.

New analysis reveals that more than 166,000 square miles of forest habitat — an area roughly the size of California — were lost to deforestation in the tropics and subtropics between 2004 and 2017. Nearly two-thirds of this loss occurred in Latin America — with the Brazilian Amazon experiencing the most devastation. Driving much of this deforestation are large- scale commercial agriculture and the production of commodities such as soy, beef, and palm oil.

By ramping up investments in protecting and restoring forests and ecosystems, Congress can effectively address major drivers of three interrelated crises: the current pandemic, climate change, and the global loss of biodiversity.

I urge you to support significant increases in funding for global conservation programs in FY22 and as part of the pandemic response, recovery, and prevention legislation. I also encourage you to lead on efforts to enact new policy protections for forests and habitats, including closing US markets to products linked to deforestation and habitat conversion.

Congress should significantly increase funding for US government programs, such as USAID's Biodiversity Conservation and Sustainable Landscapes Programs, to protect global biodiversity, secure the rights of Indigenous peoples and local communities to their lands, and stop the illegal timber trade. New policies are also needed to remove deforestation and habitat conversion from the food we eat and the products we consume.

Our planet's forests and biodiversity provide us with incalculable benefits. Investments to conserve, protect, and restore nature pay dividends for our health, our economy, and our long-term security. For our country to emerge stronger and safer after this devastating pandemic, we should recognize that investing in nature is one of the surest and most cost-effective ways to benefit human health and the health of the planet — and to prevent another wildlife-borne pandemic from emerging in the future.

Sincerely,
[Your Name]
Sign Petition
SHAREShare this petition with friends!TWEETEMAILEMBED
Sign Petition
See more petitions:
You have JavaScript disabled. Without it, our site might not function properly.