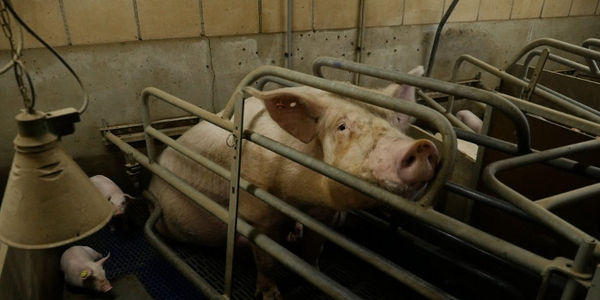 End the Cage Age for All UK Farm Animals

Life for millions of British farm animals is far from the idyllic vision of pigs wallowing and hens pecking in the fresh air and sunshine. For many it is quite simply a nightmare, in which they are confined to cages for part, or even all, of their lives.

Caging animals causes immense suffering. Cages confine and restrict, they thwart many of an animal's natural instincts, and they are a desolate reflection on our society. Despite the obvious failings of this outdated technology, more than 16 million farm animals are trapped in cages every year in the UK.

We believe that every farm animal should have the chance to feel the sun on their back and the earth under their feet. That's why we are calling on the government to introduce new laws that would ban cages for ALL farm animals in the UK. Will you join us?

Please urge your animal welfare minister to bring about an end to the cage age and to usher in a new era in farming of which Britain can be truly proud. Let's take the next big leap to End the Cage Age for ALL UK farm animals!

Photo caption: More than half of Britain's mother pigs rear their young in cages like this one on an EU farm.

Every year, over 16 million UK farm animals are kept in cages where they are unable to express their natural behaviours. This causes immense suffering.

We call on all the governments across the UK to end this inhumane treatment of farm animals.

Cages inflict immense misery on enormous numbers of farm animals every year. They are cruel and unnecessary, as higher-welfare cage-free systems are viable. This cannot be the future of British farming.

We, the undersigned, urge legislation to prohibit the use of:

b. farrowing crates for sows;