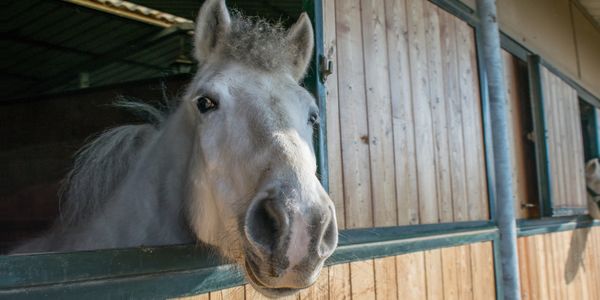 This Vet Abused Animals Until They Were Missing Eyeballs. Ban Him From Practicing Veterinary Medicine Now!

Veterinarians are supposed to care for animals, but instead, a veterinarian in Oklahoma is allegedly a serial animal abuser. When authorities arrived at the vet's farm, they discovered more than 200 animals who were in such awful conditions, they needed to see a veterinarian - but definitely not this veterinarian. The abused animals included two horses... and each were missing an eye. One of the poor horse's situation was so bad, its remaining eye was infected and leaking ooze onto its face. To make matters worse, this vet was already a known animal abuser!

Clearly, this veterinarian should never be around animals again - neither his own pets, nor other people's. Sign the petition to demand he be disbarred from practicing veterinary medicine. He must also be banned from owning pets or livestock!

So far, officials have rescued 186 animals from this vet's property. The animals they rehoused included the partly-blind horses, kittens and cats, French bulldogs and Blue heeler dogs, guinea pigs, chickens, and ducks. They also discovered scores of exotic animals that were equally mistreated and neglected, such as sugar gliders, large tortoises, ostriches, emus, and also two parrots who were in such distress, they were missing chunks of their feathers.

The most outrageous part of this story is that authorities knew this same vet had previously harmed animals. Last year, authorities arrived and seized upwards of 350 animals from his farm and charged him with animal abuse and animal cruelty. Those charges are still pending - yet somehow, in the meantime, he was able to accumulate hundreds of more animals and continue practicing as a veterinarian. In fact, this veterinarian is even still in charge of running a clinic!

Apparently, the Oklahoma Veterinary Board is aware of the situation, but so far is refusing to revoke this man's license to practice veterinary medicine. The board has claimed it's holding out on making a final decision until the disgraced vet's court case is over. But that could take years, and meanwhile, animals are continuing to suffer.

Even worse, the board isn't considering measures that are strong enough to keep pets safe. It says it might punish this vet with a 10 year probation on practicing medicine. But when his probation is up, he could easily come back and start harming animals again! Because of the Oklahoma Veterinary Board's negligence, hundreds of animals became this vet's latest victims - and two horses lost eyes. There is no excuse for allowing this man to still have access to helpless animals.

Tell the Oklahoma Veterinary Board to immediately revoke this notorious veterinarian's license immediately. Local authorities in Oklahoma should also ban this man from ever living with, adopting, or owning animals again!
Sign Petition
SHAREShare With FriendsTWEETEMAILEMBED
Sign Petition
See more petitions:
You have JavaScript disabled. Without it, our site might not function properly.

Care2
This Vet Abused Animals Until They Were Missing Eyeballs. Ban Him From Practicing Veterinary Medicine Now!
SHARETWEET