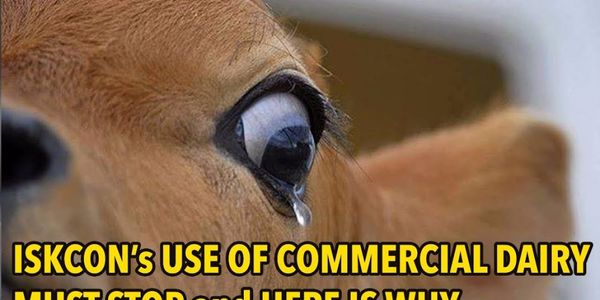 Ban the use of all commercial milk at ISKCON temples

The International Society for Krishna Consciousness (ISKCON), also known as the Hare Krishna movement or Hare Krishnas, is a Gaudiya Vaishnava spiritual organization founded in 1966 by A. C. Bhaktivedanta Swami Prabhupada.

Philosophically it is based on the Sanskrit texts Bhagavad-gītā and the Bhagavat Purana. These are the historic texts of the devotional bhakti-yoga tradition, which teaches that the ultimate goal for all living beings is to reawaken their love for God, or Lord Krishna, the "all-attractive one".

In these devotional texts, Krishna is described as the supreme deity and also as a cowherd boy who is fond of cow's milk. Worship of Krishna, therefore, involves using milk products from cows.

The cow is considered the "mother" and the bull as "father" in the Vedic tradition of India. Cow protection is an integral part of the Hare Krishna movement.

From the beginning of the movement he started in 1966, Swami Prabhupada encouraged his students to develop self-sufficient farms that could supply all their needs, completely independent of modern society, including commercial dairy. He advocated, "Simple living and high thinking." He wanted ISKCON to be a positive alternative to modern life. Devotees of Krishna were to be self-sufficient and produce their own food and acquire milk from their own protected cows.

In the broadest use of the word, ahimsa refers to a lifestyle of peace and is most popularly connected with Gandhi's civil disobedience movement of the 1930s. However, in the modern context, ahimsa is typically tied exclusively to diet.

Since the yoga path is all about connecting with our higher self and God, it follows that Hare Krishna devotees should walk a path of (ahimsa) non-violence, by respecting all living beings.

The ahimsa path necessitates an awareness of the spiritual equality of all beings. This awareness naturally manifests in one's choice of food and that obviously includes evaluating the quality of the dairy one may wish to consume. Quite simply, one is taken by force from an abused cow while the other is given with love by a protected cow. In other words, this is the ONLY kind of milk that could ever be considered "ahimsa."

We believe the commercial dairy sold today is not ahimsa nor pure and, therefore, should not be offered to Krishna in worship. The abuse of cows and calves at factory farms serves to remind ISKCON members of their responsibility to firmly establish cow protection and sustainable farm projects as their founder had demanded.

"Civilization will collapse very soon, all over the world......our farm projects are an extremely important part of our movement. We must become self-sufficient by growing our own grains and producing our own milk, then there will be no question of poverty. So develop these farm communities as far as possible. If these farms become successful then the whole world will be enveloped by Krishna consciousness. Krishna is the Farm Acarya, Baladev is holding a plow, and Krishna is holding the calf." - Swami Prabhupada.

He stated in his commentary to the Srimad Bhagavatam that the abuse of cows in the commercial dairy farms was the cause of all problems in human society.

"The cow stands with tears in her eyes, the sudra milkman draws milk from the cow artificially, and when there is no milk the cow is sent to be slaughtered. These greatly sinful acts are responsible for all the troubles in present society."  (source)

In a letter to a disciple he wrote:

"First of all produce your own food grain, milk and vegetables, eat as much as absolutely necessary, don't eat more, and in this way keep your health. Follow the regulative principles and then if there is time left over you can divert your attention." (Letter to Rocana das, December 17, 1975)

Swami Prabhupada also told his followers that if something is contaminated it should be avoided. In this letter to his disciple, Krishna das, he wrote the following:

"Regarding purchasing things in the market, these items are considered as purified when we pay the price for them. That is the general instruction, but WHEN WE KNOW SOMETHING IS ADULTERATED, we should avoid it. But unknowingly if something is purchased, that is not our fault. Things which are suspicious, however, should be avoided." – Srila Prabhupada, 25th Dec 1969

It is my opinion that he may have heard about a particular milk brand being adulterated after the fact, and since he had purchased it not knowing this, he considered it acceptable. However, he makes it clear in the above letter, once one knows something is adulterated that thing should be avoided.

As long as ISKCON members continue to buy milk in the marketplace, they will be shaming the good name of Swami Prabhupada and his spiritual movement.

We, therefore, urge the GBC to pass a resolution to ban the use of all commercial milk at ISKCON temples worldwide and to set in place concrete plans to establish the self-sufficient model that their founder envisioned.

"I don't consume any dairy unless its source is compatible with what we have in Krishna Valley. Blood milk, milk from the commercial industry is not for me. But I travel a lot and ahimsa or cruelty-free milk is not widely available, so, therefore, I am mostly dieting as a vegan." - Sivarama Swami

"Srila Prabhupada told his disciples not to offer anything to Radha Krishna made by the karmis and to sell the commercial dairy sour cream "at any cost." Do you think he would consider commercial dairy milk infested with pus, hormones, chemicals, and MRSA suitable to offer to Sri Sri Radha Govinda?" the late Kurma Rupa prabhu

"Consuming milk or milk products that originate from cows that are not protected (including their calves) for their entire lives, go against basic tenets of Krishna consciousness (cow protection and compassion for all living entities). Therefore it is my opinion that milk and milk products from unprotected cows should not be consumed." - Bir Krishna Goswami

"If we (ISKCON) believe in cow protection we must stop funding cow slaughter with our purchases of commercial milk." - Vaiyasaki prabhu.