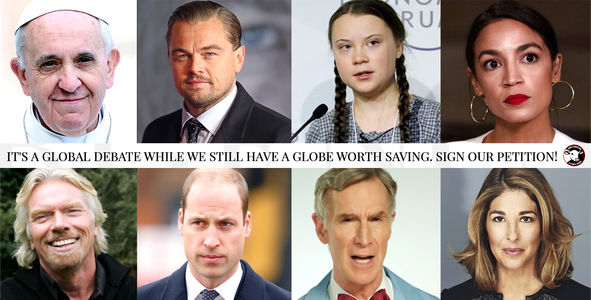 Tell influential environmentalists that Animal Agriculture is the biggest destroyer of our planet!

Sign here for the animals, the earth and the future of our species. Your voice matters!

It is a proven fact that livestock factory farming emits more gases into the environment than cars and factories put together. It is also the leading cause of species extinction, rainforest eradication and ocean dead zones. Not to mention gobbling up 30% of the earth's fresh water and occupying vast swathes of land where nothing else can grow!

We will be sending our signed petition to selected climate change influencers with outstanding green credentials, including:

Pope Francis
Pope Francis has brought a much-needed message to the world - mercy for the animals, the planet and all who suffer. We need him to make the connection.

HRH The Prince William, Duke of Cambridge
Prince William recently made an appearance at the World Economic Forum at Davos in a bid to raise awareness among the global elite of the need to tackle urgent environmental challenges.

Sir Richard Branson
Founder of the Virgin Group, Branson was speaking up about climate change before it even became an issue. He believes that to save the planet, we all need to speak up, team up and do our bit. Branson also believes that animal agriculture will soon be a thing of the past, has stopped eating beef and is an investor in "clean meat" startup, Memphis Meats

Greta Thunberg
This 16-year old climate activist made headlines when she raised awareness of global warming at a strike outside the Swedish parliament buildings. She has inspired young school children to campaign for climate change action and was recently the star of COP24. Time Magazine named Greta one of the world's "25 most influential teenagers of 2018".

Naomi Klein
Author of "This Changes Everything", a global bestselling book that exposes the myths that are clouding the climate debate. Naomi believes we need collective action and we all need stand up in a truly unprecedented way.

Bill Nye
Also known as "The Science Guy", Bill is a passionate advocate for climate change awareness and believes that plant-based diets will be an important factor for people to consider when wanting to lessen their impact on the planet.

All of these influencers are already committed Climate Change campaigners, but we need to make them aware that animal agriculture is harming our planet, along with the animals and us.

It would have an enormous impact if they spoke out and asked people to embrace a plant-based diet.

Make your voice heard and join us on our journey to the 2021 United Nations Climate Change Conference (COP26).

The planet and all its inhabitants need you!
Sign today!

*You also have the option to hide your name from public viewing.

Care2
Tell influential environmentalists that Animal Agriculture is the biggest destroyer of our planet!
SHARETWEET