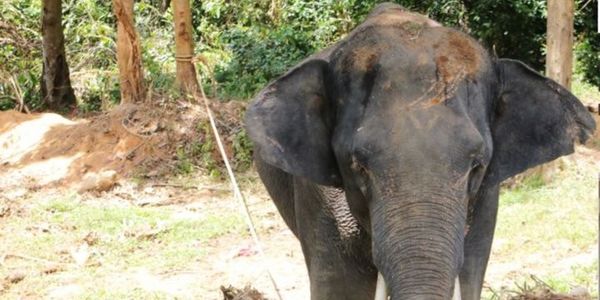 Release Baby Thanwa, only 8 years old, who is chained up and "disciplined" after injuring tourists.

According to the newspaper, the two Italian tourists were intoxicated with alcohol and opened a can of beer during the ride on the back of the poor, only 8 or 9 years old animal. The sound of opening the can and the strong smell of beer probably frightened the baby and he panicked. Mahouts often are drunk and then turn cruel in beating the elephants. It is known that the smell of alcohol can upset these animals.

Plai Thanwa suddenly and violently shook his two Italian riders and the mahout from his back, knocking down the mahout as well, and rushed on Trofa Manuel, 29, to pierce him with his tusk.

In recent photos it is seen, that this poor baby has been shamefully "disciplined" and is now chained to all four of his legs and his head is full of bloody wounds, probably from the bullhook. IT IS A SHAME AND SCANDALOUS THAT A BABY ELEPHANT IS BEATEN UP AND TORTURED JUST BECAUSE HE GOT SCARED OF 2 DRUNK IDIOTS.

This camp is representative of many trekking camps who think that an elephant is a tool they can use when and wherever they like with only one goal: MAKE MONEY OUT OF THE SUFFERING OF THE POOR ELEPHANTS.
There are about 270 elephants entertaining tourists at camps around the province but the demand to ride elephants is so high that elephants normally used for labour are drafted into tourism service, an unfamiliar function in which they sometimes get out of control.

Female elephants seem to be better suited to tourism, but there aren't enough of them available to meet the demand, so bulls are also sometimes used. Having male and female elephants quartered and working together, however, is asking for trouble.

Our demand is: to stop giving elephants rides, to turn this place in an ethical experience, where tourists can observe the elephants in semi- freedom with all the necessary care they need. To stop the exploitation. To immediately stop the torture of this young elephant, and to give him all the medical treatment he needs right now.

Elephants are sentient beings, they have emotions, are higly intelligent and are in fact nothing less than non-human persons. Treat them with respect and dignity.
Sign Petition
SHAREShare this petition with friends!TWEETEMAILEMBED
Sign Petition
See more petitions:
You have JavaScript disabled. Without it, our site might not function properly.

Care2
Release Baby Thanwa, only 8 years old, who is chained up and "disciplined" after injuring tourists.
SHARETWEET