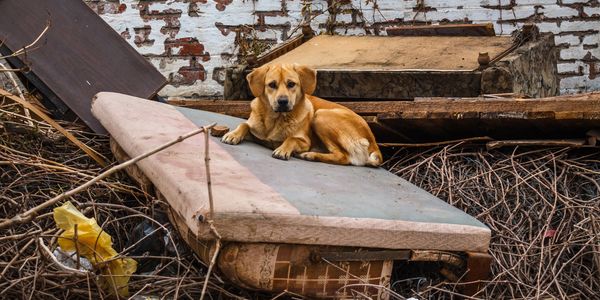 The sights, smells, and sounds on that property in Clay County, Florida must have been enough to stop anyone in their tracks. But luckily, rescuers forged ahead into "deplorable conditions" in order to save "approximately 100 dogs, 42 rabbits, 33 chickens, five pigeons and an unknown number of goats" from imminent misery, or even death.

We must make sure this case is seen through to the end! Demand a thorough investigation into how someone was able to obtain and neglect this many animals, and make sure that it never happens again -- at this, or any other person's hands! Sign on today.

The rescue of these poor animals stretched on for an entire day, and agencies actually expected that it would last a few more. Overhead footage captured by local news outlets showed a total nightmare scenario -- deteriorating, collapsing structures make up the entire property, debris and garbage scattered throughout enclosures. Apparently, neighbors couldn't even tell how bad things had gotten for these nearly 200 animals -- all they could do was hear the noise coming from the property, and observe animals sometimes escaping, trying to get free. That's when authorities got involved.

So many animals were rescued that they are still undergoing veterinary analysis at the fairground being used to house them safely -- maybe for the first time in their lives -- so it's hard to tell how many of them are sick or hurt. Many of the dogs are heavily pregnant, with apparently already a ton of puppies to take care of. No matter what, we know that it took a great deal of time and neglect for things to get this bad.

And they never should have been allowed to. Whatever this person's story or intention was, they should never have been able to keep this many animals in such terrible conditions. A full investigation must be done into how things got this bad, and to make sure that it doesn't happen again -- sign the petition if you agree!
Sign Petition
SHAREShare With FriendsTWEETEMAILEMBED
Sign Petition
See more petitions:
You have JavaScript disabled. Without it, our site might not function properly.