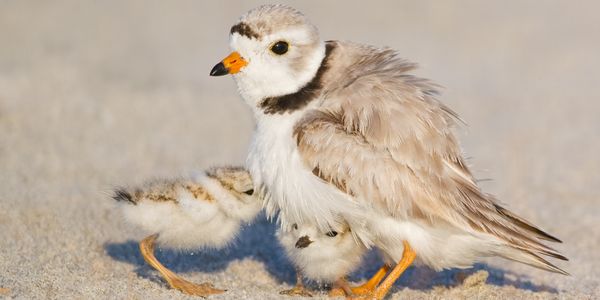 Ground-nesting birds and off leash dogs don’t mix. Sign to support protections for birds at their most vulnerable time of year!

Dogs benefit greatly from uninhibited movement. Off leash exercise allows our pups to move how they would naturally -- stopping to sniff, backtracking or forging ahead, changing course and speed at will. If their disposition and training is right, it's a wonderful way for them to get enrichment, exercise, and decompression.

But even if they are well-behaved, the way our sweet family dogs move off leash is indistinguishable to wildlife from the way their other natural predators behave. After all, Fido is a direct descendent of wolves.

Wildlife like ground-nesting birds therefore flee when our dogs even pass near them. In countries like Spain and the UK, this 'flushing' has gotten particularly bad during nesting season on the countries' beaches. Terrified birds bolt on instinct, often leaving their young, helpless babies -- or unhatched eggs -- unprotected.

Sign the petition to demand that conservation officials in Spain, the UK, and any other European countries with wildlife-dense beaches enact leash laws during nesting season! Save the birds!

Long before beaches became popular off leash spots for our doggos, ground-nesting birds were using them as safe havens for their vulnerable eggs. But for the past few decades, these bird populations have been steadily declining. And a huge contributor is nest disturbance.

The numbers simply don't lie: when dogs and their walkers roamed Spanish beaches in an uninhibited way (not sticking to paths), a study found birds were flushed from their nests 93.8% of the time. Walkers without dogs who followed designated paths flushed the same birds a mere 12.9% of the time.

These little birds -- various types of tiny plovers, or the striking orange-beaked oystercatcher, for example -- can't take the fear. If they are flushed too often from their nests, experts warn that they will abandon them completely. Eggs left without the warmth of their mother freeze and perish. Some eggs left too long in the hot sun, missing the shade from their guardians body, boil and die. Left alone, eggs or newly hatched babies are vulnerable to starvation, exposure, or actual predators. Even if our dogs don't directly harm these baby animals, their presence could be a death sentence.

While educating and directing the public through information campaigns and signs has proven to be very helpful, leash laws would go a long way in helping declining bird populations like the ringed plover, one of Britain's most endangered bird species whose population has fallen by almost 40% in just 30 years.

Nesting season is from March to June, and conservationists agree that for the other eight months of the year, there is no issue allowing dogs on wildlife beaches off leash. If one can even call this a 'sacrifice' for dogs and their owners, it is a small one to pay for the survival of countless bird species! Sign the petition asking that leash laws be passed and enforced on Spanish, UK, and other European beaches where ground-nesting birds raise their families!

Care2
Ground-nesting birds and off leash dogs don’t mix. Sign to support protections for birds at their most vulnerable time of year!
SHARETWEET