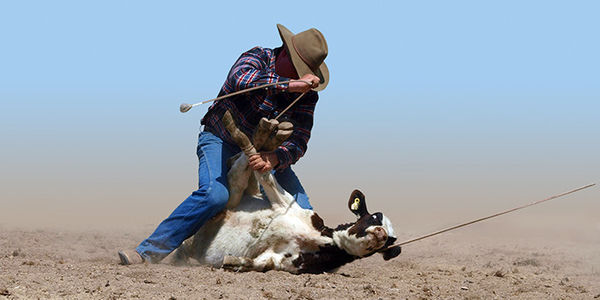 Sign now to put an end to cruel tie-down roping

In this popular rodeo event, a terrified calf is released out of a chute into an open arena. The animal runs for their life, only to be caught at a dead sprint by a rope around the neck. The roper then dismounts their horse and swings the calf to the ground in a maneuver called "flanking". Next, the calf has three legs tied together and must remain on the ground for at least six seconds.

A less dangerous version of this event exists. It's called breakaway roping. In breakaway roping, the calf is not jerked by the neck or slammed to the ground. So why is PRCA continuing to endorse tie-down roping?

The state of Rhode Island has banned tie-down roping because it is so dangerous to calves. Calves used for roping weigh between 220 and 280 pounds. Can you imagine the momentum a 220+ pound animal gains while running? Catching a calf running at full speed by the neck can easily cause torn ligaments, bruises, and broken ribs, backs and necks.

Countless calves die in this event. Even more are killed in "practice".

The Professional Rodeo Cowboys Association sees nothing wrong with promoting rodeos that practice this barbaric event. We're calling for an end.

Sign the petition and ask the PRCA to drop all endorsements of this cruel practice! Together we can save calves from this fate.
read petition letter ▾
I am writing today to express my concern on a critical animal welfare issue. I am deeply concerned with the unnecessary suffering and injuries caused in tie-down roping events.

Calves used for roping weigh between 220 and 280 pounds. The momentum a 220+ pound animal gains while running is bound to cause pain, discomfort and injury. Catching a calf running at full speed by the neck can and does cause torn ligaments, bruises, and broken ribs, backs and necks.

In 2013, the organization Showing Animals Respect and Kindness released a horrifying video of a calf's death at Cheyenne Frontier Days. Despite PRCA's no jerk-down policy, numerous rodeo participants were seen engaging in this practice. On day two of the PRCA-sanctioned event, a calf's neck was snapped in the arena. The animal lay convulsing in the dirt as she slowly died. Even if participants are penalized under the no jerk-down rule, it is often too late.

So much footage and testimonies like these exist. Veterinary Medical Board reports have exposed countless rodeo injuries and deaths in recent years. Time after time, tie-down roping shows to be one of the most common sources of injury in the arena.

Even if modern animal welfare guidelines make injuries less likely, tie-down roping is still one of the most dangerous rodeo sports for animals. It is a known fact that breakaway roping is inherently less dangerous. Breakaway roping allows for the same event to take place without the calf being jerked by the neck or slammed to the ground. So why is PRCA continuing to endorse tie-down roping at its events?

The state of Rhode Island has banned tie-down roping because it is so dangerous to calves. I hope that other states will soon follow suit- and that PRCA will develop a more modern stance on this grossly outdated sport. Please make the humane move and drop all endorsements of tie-down roping. Thank you!