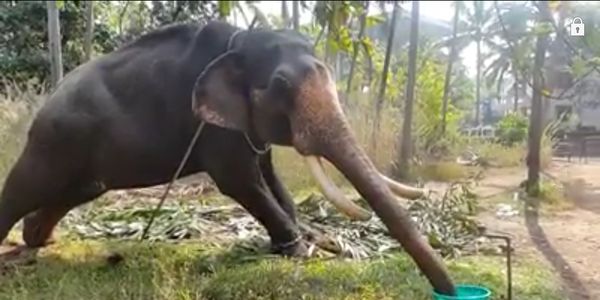 HELP! PRASAD HAS BEEN TAKEN ILLEGALY TO THRISSUR LAST YEAR! BRING HIM BACK TO KANNUR WHERE HE IS BASED!

NEW INFORMATION: ON THE 13TH OP APRIL 2017 THEY REMOVED PRASAD FROM HIS BASE KANNUR, TO A REMOTE PLACE. THEY TOOK HIM FOR A FAKE REJUVINATION IN ORDER TO TORTURE HIM OUTSIDE THE SIGHT OF THE TEMPLE AND LEGAL AREA AND OF THE PEOPLE WHO KEEP AN EYE ON HIM, TO DO SO WITHOUT ANY REPERCUSSIONS FOR THE TEMPLE. A DOCTOR NAMED GIRIDAS, AND WELL KNOW, FOR MAKING FALSE DOCUMENTS AND FALSE DIAGNOSIS, A REAL GOVERNMENT SERVANT, WHO EVEN HAS NO AUTHORITY IN KANNUR, BECAUSE HE IS FROM THRISSUR, MADE UP A FALSE REPORT THAT ALLOWS THEM TO KEEP PRASAD THERE.  THERE ARE THREE LEGAL CASES IN COURT RUNNING TO PROTECT PRASAD FROM BEING EXPLOITED! KEEPING HIM IN SUCH A PLACE WITHOUT ANY REASON IS ILLEGAL. THEY CALL SUGASHIKITSAH, MEANING: REJUVANATION TREATMENT.  TORTURE TO THE CORE AND IT IS TO BE FEARED HE WILL BE BEATEN TO DEATH BECAUSE FOR THE TEMPLE HE IS JUST A BURDEN. THIS EVIL DOCTOR, WHO IS FAMOUS THROUGHOUT KERALA AND CLOSE WITH ELEPHANT OWNERS WILL CONDUCT THE POST MORTEM AND GIVE A REPORT AS HEART ATTACK. PRASAD IS ONLY 29 YEARS OLD, A MAJESTIC BULL. HE DESERVES A BETTER LIFE AND FUTURE. WE DEMAND PRASAD TO BE BROUGHT BACK TO HIS BASE IN KANNUR AND TO AN INVESTIGATION INTO THE AUTHORITY OF THIS SO CALLED DOCTOR WHO IS CONSTANTLY VIOLATING THE RULES AND IS ONLY A PUPPET FOR KERALA'S MAFFIA.

SO THIS IS A CHANGE IN THE SECOND PETITION TO BECOME A THIRD ONE, BECAUSE THE SAD NOW LIFE THREATENING STORY CONTINUES AND WE CAN'T LOOSE TIME TO START ALL OVER AGAIN!

FOR THE SECOND TIME A PETITION HADTO BE MADE FOR PRASAD! SOME INFORMATION ABOUT THIS ELEPHANT:
Prasad is a temple elephant based in Kannur he is around 29 years old. Owned by Sree Sundareswara temple, Talap , Kannur , Kerala Pin 670002
His registration details are as follows
Ownership Certificate no 103 dated 10-03-1992/ certificate no 700/ Microchip no 000659388A dated 19-05-08.
THOSE WHO MANAGE THE TEMPLE, ARE REGULAR OFFENDERS. THERE HAVE BEEN SEVERAL CASES FILED AGAINST THEM IN KANNUR FOREST DIVISION, BUT... THE OFFICIALS DON'T REACT ON ALL CASES: THAT YOU CAN CALL ALREADY NEGLECT.
THE PROBLEM IS, THE MANAGEMENT DOESN'T KEEP REGULAR MAHOUTS AND THEY CHANGE EVERY 4 MONTHS. THIS MEANS: EVERY 4 MONTHS PRASAD MUST SUFFER CRUELTY WHEN A NEW ONE JOINS.
There is a traditional belief among mahouts that if the elephant is not feed with enough water and food, they will not have energy and will surrender to the mahouts.
Prasad goes through this process very often because of the new mahouts who take charge every 4 months...
THERE IS A PERSON WHO VISITS PRASAD REGULARY, WHO KNOWS HIM WELL, AND TO WHOM PRASAD RESPONDS WITH JOY AND GREETINGS. HE IS VERY FAMILIAR WITH HIM AND RESPONDS TO HIS CALLS.
A FEW DAYS AGO THIS PERSON WITNESSED HOW PRASAD WAS CHAINED AT BOTH FRONT LEGS AND HIND LEGS IN HIS TETHERING PLACE, FULL OF WASTE AND DUNG, NOT ABLE TO DRINK. THERE WAS A BUCKET ( EMPTY) WHICH HE EVEN COULDN'T REACH. AGAIN HE IS BEING KEPT IN UNHYGIENIC SURROUNDINGS, THERE ARE NO WASTE WATER DRAINS.
THERE WAS EVEN A WOUND ON THE TIP OF HIS TAIL! THE MAHOUTS PULL OF THE HAIR TAIL AND SELL IT OFF. THE MAHOUT WAS CAUGHT SELLING THE TAIL HAIR.
HERE IS THE TESTIMONY OF THIS VISITOR:
- I happened to visit him that morning early February around 1030 morning local time.. he was calling me and I asked him what he wanted.. he was blowing through his trunk when I asked whether he wants water.. I was helpless

I opened the tap and kept a bucket but the flow of water was less.. he was locked with chains on both front and hind legs and he could not move much.. so he was stretching very badly to reach the bucket. I could not move the bucket to him because of the flow was low..

I called the mahout Sreejith and asked him why he had not provided water to the elephant.. He replied back that he had provided water to Prasad just 30 min back.. normally when the elephant is provided water there will be spill outs and the floor will be wet.. there were absolutely no signs of this .... It is known an elephant minimum has to drink 200 liters water a day.
So i asked him to come at the tethering space.. he came there after 10 minutes opened the pipe which is used to normally feed him . to my surprise he had 8 trunks full of water... an elephant who is provided water 30 min back won't drink 8 trunks full of water... it is summer and the temperature is touching 40 now a days.. He is tethered in the sun with less water and fooder... this will lead to dehydration ( (presumably to break his spirit.)

PRASAD DETAILS WERE NOT DECLARED AS PER THE CENTRAL GOVERNMENT LIVESTOCK DECLARATIONS RULES SET IN 2003 SO HIS OWNERSHIP CERTIFICATE IS INVALID AND HE SHOULD NOT BE PARADED UNTIL FURTHER NOTIFICATION OF THE GOVERNMENT.

He is being chained on four legs in his tethering place: a dirty unhygienic little space, where he stands in his own dung and dirt, because there are no water drains. He gets too little food and no water ( or very little) because every new mahout thinks in old school method: poor food, little water: no energy, and quicker surrender to the mahout.  Elephants need minium 400 liters of water every day. Prasad endures these methods every 4 months because the management of the temple changes mahouts every 4 months. Mahouts also sell tailhair of the elephant and as consequence he has a wound on the tip of his tail.

The temple management are regular offenders and already several cases have been filed against them but the officials of Forest Kannur division doesn't react on many of them.

Now he is tethered in the soarching sun, chained, no water, in dirty space and with not enough food: THIS HAS TO STOP!

Furthermore: HIS OWNERSHIP CERTIFICATE IS ILLEGAL AND INVALID. BUT HE IS PERMITTED TO ATTEND FESTIVAL PROCESSIONS AND PARADING WHICH IS A CLEAR VIOLATION OF THE COURT ORDER.

WE DEMAND AN INVESTIGATION INTO THE ILLEGALITY OF THE MAJESTIC PRASAD KEPT IN THAT TEMPLE, AND OF THE VIOLATION OF THE COURT ORDERS, TO STOP THE CONTINUES CHANGES OF THE MAHOUTS, TO IMPLEMENT BETTER LIFE CONDITIONS, TO TRAIN MAHOUTS WITH THE NEW METHODS OF POSITIVE TARGET TRAINING, WITHOUT VIOLANCE NEVER MORE, TO STOP THE NEGLECT AND THE PROFIT AND TO PROVIDE IMMEDIATE MEDICAL CARE.

MANY CONCERNED CITIZENS ALL OVER THE WORLD HAVE SIGNED THIS PETITION WITH HOPE TO END PRASAD'S SUFFERING.  PLEASE DO WHAT IS NECESSARY IN THIS CASE.

Care2
HELP! PRASAD HAS BEEN TAKEN ILLEGALY TO THRISSUR LAST YEAR! BRING HIM BACK TO KANNUR WHERE HE IS BASED!
SHARETWEET