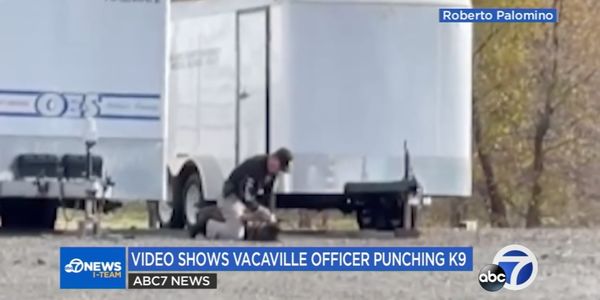 A police officer was caught on video violently abusing a police dog, but still hasn’t faced any consequences

On a sunny Monday in Vacaville, California, a beautiful Belgian Malinois mix named Major was training with his partner -- both the three-year-old pup and the man who cared for him were part of the police force there. But things quickly took a turn, and if it were not for a concerned passerby who caught what happened on video, Major might still be in the hands of his abusive, violent handler.

The passerby, Roberto Palomino, didn't see anything at first -- it was Major's crying and screaming that caught his attention. Then he saw it -- Major's 'caretaker' was on top of the defenseless, terrified dog, and he was using all of his body weight to pin poor Major to the ground, flattening him onto the hard concrete. Palomino saw the officer violently punch Major the dog over and over again as he lay trapped and wailing; he counted 10 punches before he could even start recording. The footage is absolutely agonizing.

Sign the petition if you want to see this violent animal abuser removed from the force, banned from ever becoming a police officer ever again, and charged with felony animal cruelty!

Right away, the Vacaville Police Department (VPD) jumped to the defense of this officer and his disgusting behavior, claiming that the video was taken out of context. Just before the filming began, Major had apparently not given up a toy that he had been rewarded with during training. They claimed that "all training programs are not alike and need to be tailored to the needs of the specific dog and handler." Are they really implying that beating the pulp out of a pinned animal is some sort of training program? Are we supposed to accept that a dog hoarding a toy is cause for horrendous, violent abuse? We know from expert dog trainers that physical abuse is never an effective or acceptable style of training.

Thankfully, after an overwhelmingly negative reaction from the public, VPD removed Major from this man's custody -- we have to call him 'this man' because VPD continues to protect him by withholding his identity.

Major's new handler, outside of the police department, describes him as polite and well-mannered, and is confident that he "will make an easy transition to family pet or companion."

But make no mistake -- whether a dog is as sweet as can be, or shows signs of aggression, there is no justification for restraining and repeatedly beating a dog. Not only is it cruelty, plain and simple; behavioral scientists have proven time and time again that negative reinforcement is an ineffective method of training. Scaring dogs into obeying guarantees you an empty-shell, shut down, fearful, and often even more aggressive dog.

Unfortunately, the violence perpetrated against Major at the hands of a police officer is not an anomaly, it is part of a pattern. The Department of Justice estimates that 25 to 30 dogs are killed by police every single day.

Major was brutally beaten ON VIDEO on Monday, December 28, 2020. As of the time of this writing, January 8, 2020, the entire incident is still "under investigation." When such clear video evidence exists, it should not take this long for charges to be brought an arrest to be made.

This is an outrage. VPD needs to remove this violent abuser from the force immediately, and charge him with animal cruelty! Sign the petition to demand justice for Major!

Care2
A police officer was caught on video violently abusing a police dog, but still hasn’t faced any consequences
SHARETWEET