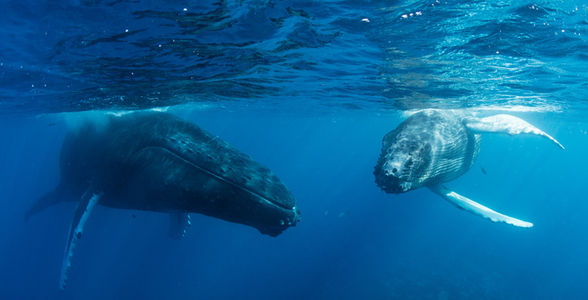 Those of us of a certain age remember the story of Humphrey the Humpback whale, the wayward cetacean who twice detoured from his Mexico-to-Alaska migration route and got lost in the San Francisco Bay. In both 1985 and 1990, volunteers along with the U.S. Coast Guard and other organizations worked hard to get him back on track so he could continue on his way.

Hundreds of volunteers, and millions of onlookers rooted for Humphrey to make it back to the open ocean, and despite all obstacles he did! The story is an example of teamwork and compassion, and it taught both young and old the power of perseverance.

Humpback whales are endangered, and once again Humphrey and his friends need our help.

Last year 54 humpbacks found themselves entangled in fishing nets. One-third of those were due to crab fishing lines off the California coast. Although whales are powerful creatures, they are rarely able to untangle themselves from nets and lines. And once caught, their condition can quickly decline as they suffer from everything from dehydration and infection to respiratory and breathing problems, even starvation.

Humpback migration, breeding, and feeding seasons and routes are well known among biologists and the California Department of Fish and Wildlife (CDFW). These areas have a higher concentration of whales and thus there is a higher risk for ensnarement.

In order to prevent whales and other marine animals like sea turtles from going extinct, we must create policies that protect them from threats like entanglements.

That's why conservationists are so excited that the California legislature has passed the Fisheries Omnibus Bill of 2018 which will require that CDFW adopt policies that will prevent whale and sea turtle entanglements and implement them by November of 2020.

Now, all it needs to become law is the governor's signature. This crucial law could put an end to the tragic spate of incidents over the past few years and help ensure that humpback whales and other animals can roam in peace, free from the threat of a crabber's net.

Please join us in asking Governor Jerry Brown to sign the Fisheries Omnibus Bill of 2018 without delay!

The growing instances of humpback whale entanglements is troubling. With a simple policy change these numbers could be drastically reduced or even avoided completely. Please implement common sense protections for marine life off California's coast and ban crabbing during whale "high season."