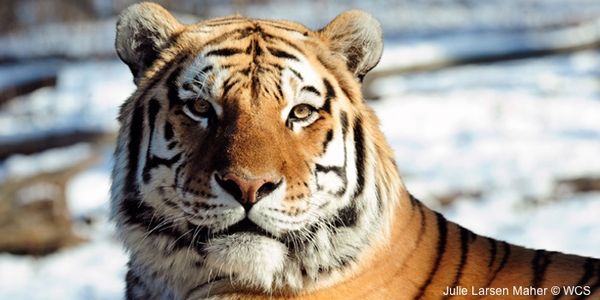 Tigers once ruled the jungles of Asia. Today, we have only 3,200 wild tigers left on Earth.

Organized gangs of poachers hunt them down and sell their skins, bones, and other body parts for profit. As a result, tigers are now in serious danger of going extinct in the wild.

Congress has the power to help save these magnificent creatures by reauthorizing the Multinational Species Conservation Fund (MSCF), but they aren't likely to bring it to vote unless they hear from constituents like you.

It's our global responsibility to stop the extinction of tigers at the hands of poachers. If we cannot save this awe-inspiring icon of nature, what hope do we have of protecting any other species from extinction?

There's no time to lose — if the MSCF isn't reauthorized, crucial programs that protect tigers will likely disappear.

As a constituent and a supporter of the Wildlife Conservation Society (WCS), I'm writing to urge you to cosponsor H.R. 335, introduced by Representatives Don Young (R-AK) and Pedro Pierluisi (D-PR), to reauthorize the Multinational Species Conservation Fund (MSCF) through 2020.

The MSCF is the cornerstone of the international conservation programs administered by the U.S. Fish and Wildlife Service (USFWS). Since 1989, the five funds that make up the MSCF – all established by Congress with bipartisan support – have awarded more than 2,500 grants to protect some of the world's most endangered species, including tigers, rhinos, great apes, African and Asian elephants, and marine turtles. Recent projects have included everything from fighting poaching of African elephants in Conkouati Douli National Park in the Republic of Congo to conserving the last remaining tigers in the Endau-Rompin Landscape in Malaysia.

I'm worried that we are losing our biological heritage. Scientific evidence shows that extinctions are occurring from 100 to 1,000 times more quickly than the natural rate. Unless we alter course, 60% of the earth's species may disappear by the end of this century. Every species and subspecies benefiting from the MSCF continues to face significant threats. Without continued support, the risk that these iconic animals may go extinct from in the wild from the constant pressures of poaching, habitat loss and human-wildlife conflict increases substantially.

I understand that it is a tough fiscal climate. But the MSCF represents an inexpensive, efficient program that provides benefits well beyond its stated objectives. MSCF investments consistently leverage 2-3 times as much from partner governments, local NGOs, international conservation organizations, and private businesses. Additionally, Congress recently reauthorized sales of the Save Vanishing Species Semipostal Stamp which generates supplemental funding for the MSCF at no cost to taxpayers.

These are critical programs for protecting the world's most charismatic species. I urge you to cosponsor H.R. 335 and join in the bipartisan effort to save wild populations of these important species.