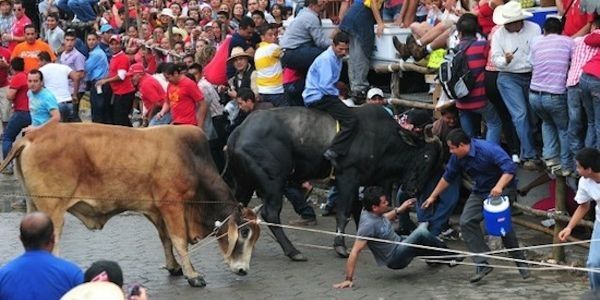 Stop This February Festival That Celebrates by Abusing Bulls

February seems to be a banner month for animal cruelty. In Spain, we can expect the annual "tradition" of hanging dogs. In Brazil, bulls all over the southern state of Santa Catarina will be set on fire. And in Vietnam, two unlucky pigs are fattened up only to be hacked to death in public for the Nem Thuong Pig Slaughter Festival.

And yet the cruelty continues. This time, we want to bring your attention to the horrors of the Fiesta de la Virgen de la Candelaria which will soon be taking place in the town of Tlacotalpan, Mexico. The animals are forced to drink alcohol and then, similar to the Farra do Boi festival in Brazil, the bulls are set loose on the town where they encounter drunken residents intent on abusing the unsuspecting beasts.

Up to 10 bulls are "set free" then they have to run a gauntlet of abuse. Residents kick and slap them, hit them with bottles and pummel them with stones. Those that make it through the barrage of abuse are tied to a boat and dragged across a body of water, only some survive.

While the object of the festival isn't to kill them like they are mercilessly slaughtered in Brazil, this "celebration" is equally disturbing and has no business taking place. While there are "rules" that ban celebrants from touching the bull, after a few drinks and hours of partying, it's not likely that people in a drunken hysteria will pay them any mind. In fact, according to some, people continue to physically attack the bulls, going so far as cutting off their ears while they are still alive.

It is time to put an end to this disgusting tradition.

We have to act immediately if we have any hope of saving these bulls. Tlacotalpan, Mexico relies on tourism, so city officials will be sensitive to public opinion from abroad.