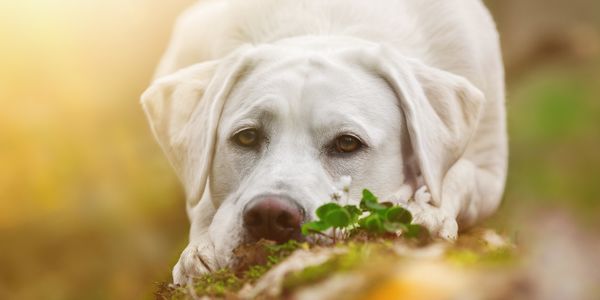 Henry the lab thought he was just going for a walk with his beloved owner. Then she abandoned him in the woods.

When Henry the yellow lab climbed into his owner's car like he had done so many times before, he was probably excited. They were headed to Orchards Park in Vancouver, Washington, about 200 miles south of Seattle. Waiting for them there were wooded trails, full of new smells for Henry to sniff and critters for him to watch and chase.

Video surveillance of the cul de sac at Orchards Park shows the owner's Tesla stop near a trailhead. She jumps out, and gets Henry out of the backseat, his tail wagging. Then she leans down and takes his leash off. She gets halfway back into the driver's seat, and then thinks better of it. She proceeds to walk towards the woods -- Henry is loyal and trusting, so of course he follows. He loves her and wants to go on a walk! But when Henry is deep enough into the trees that he isn't visible on camera, his heartless owner sprints back to her car...without him.

Henry was thankfully picked up and is in the safety of a foster home, and his owner was tracked down. But all she got was a slap on the wrist, a fine, and short period where she isn't allowed to own a pet. Sign the petition if you think Maria Bruce should be charged with criminal animal abuse, and at the very least NEVER be allowed to own a dog again!

When authorities found her, Bruce fessed up immediately. She claimed that she had 'run out of options.' This is a blatant lie. Bruce is in foster care now, part of the shelter system in Clark County, Washington. If someone can no longer physically, financially, or emotionally take on the responsibility of having a pet, shelters are always an option. In face, it's rather brave to admit that you are overwhelmed and surrender a pet to one of these facilities. There, a pet can find a safe place to sleep, enough food to eat, and volunteers and employees that have made it their lives' work to care for and love these animals. But Maria Bruce decided to ignore all that, and instead leave Henry to fend for himself in the wild.

Henry is 13 years old -- while he can still run and play with joy, he is by no means a young dog. Who knows how long he would have survived out in those woods. What if he had become injured? What if he was not spry enough to hunt for food to sustain him? Maria Bruce abandoned Henry at the very beginning of wildfire season -- the state of Oregon is now engulfed in flames. What if Henry had still been out there when the fires started tearing through the trees?

Maria Bruce escaped criminal charges just because she signed a statement admitting to what she did. She can afford a fine. She can afford to wait two years, the amount of time authorities told her until she can own a dog again. But we cannot afford to let her do this to another animal.

Sign the petition if you want Maria Bruce to be charged with animal abandonment, and that part of her punishment be that she can never, ever own a dog again.

Care2
Henry the lab thought he was just going for a walk with his beloved owner. Then she abandoned him in the woods.
SHARETWEET